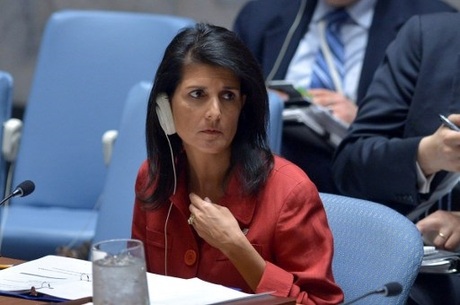 U.S. President Donald Trump plans to lead a meeting of the heads of state of the United Nations Security Council on Iran in late September, his envoy Nikki Haley announced Tuesday.

With the United States now holding the presidency of the Security Council, Haley said the aim is to put further pressure on Tehran over its alleged violations of council resolutions.

"President Trump is very adamant that we have to start making sure that Iran is falling in line with international order," Haley told reporters.

Washington has sought to build up international pressure on Iran after reimposing tough, unilateral sanctions on August 7 and setting a November 5 deadline for halting Iran's oil exports.

Those moves came after the United States decided in May to pull out of the Iran nuclear deal, saying it failed to put enough pressure on the Tehran regime to halt its nuclear weapons and ballistic missile program.

In reaction to the reimposition of sanctions, Iran demanded in The Hague that the top U.N. court suspend the unilateral U.S. sanctions.

Haley denied the United States was seeking regime change in Iran, saying the U.S. effort is aimed at supporting the desires of the "Iranian people."

But Russia's deputy ambassador to the U.N. Dmitry Polyanskiy pushed back, emphasizing that any meeting on Iran should also discuss the consequences of the U.S. withdrawal from the deal.

Beyond Iran, the US presidency of the Security Council for the month of September is likely to generate numerous controversies for the body's 14 other members.

Among these is Washington's decision to hold a meeting Wednesday on the bloody anti-government protests in Nicaragua, drawing criticism from Russia, Bolivia and China, which said the unrest there does not threaten international security and peace.