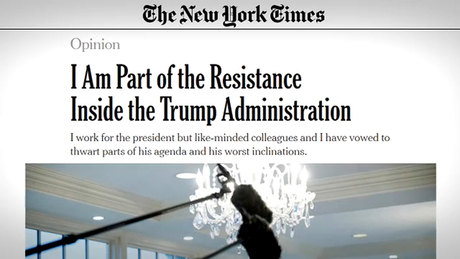 Donald Trump's top lieutenants scrambled Thursday to deny authorship of an explosive op-ed article that has plunged his presidency into its worst crisis yet by proclaiming a secret insider resistance to his reckless, "amoral" leadership.

The White House has been convulsed since Wednesday by a fevered hunt for the senior official who declared, in an unsigned article for The New York Times, that "unsung heroes" were quietly working within the administration to frustrate the president's "worst inclinations."

Vice President Mike Pence, Secretary of State Mike Pompeo and Director of National Intelligence Dan Coats stepped forward, one after another, with their own version of the same message: "Not me."

But the internet and Trump's own aides were abuzz with speculation over who the unnamed official might be and whether the act of defiance was tantamount to a coup in the making.

"TREASON?" Trump asked in a furious volley of tweets.

Moving to squelch internet speculation, Pence's spokesman said the vice president did not write the article.

"The Vice President puts his name on his Op-eds. The @nytimes should be ashamed and so should the person who wrote the false, illogical, and gutless op-ed," Agen wrote on Twitter.

"Our office is above such amateur acts."

The manifesto followed a bombshell book by Watergate reporter Bob Woodward, who portrayed Trump's White House as an out-of-control "crazytown."

The Woodward book, "Fear: Trump in the White House," reported that senior aides lifted documents from the Oval Office desk to keep the president from acting on his impulses, reinforcing the assertions in the Times op-ed piece.

News of the letter caught up with Pompeo in New Delhi, where he was traveling with U.S. Defense Secretary Jim Mattis.

"I come from a place where if you're not in a position to execute the commander's intent, you have a singular option, that is to leave," he said.

"And this person instead, according to the New York Times, chose not only to stay but to undermine what President Trump and this administration are trying to do.

"It's not mine," Pompeo added, referring to the article.

Coats, who as intelligence chief has at times been publicly at odds with the president, released a statement calling speculation that he or his deputy had written the op-ed article "patently false."

"We did not. From the beginning of our tenure, we have insisted that the entire IC (intelligence community) remain focused on our mission to provide the president and policymakers with the best intelligence possible."

Meanwhile Trump's United Nations envoy Nikki Haley was asked on her way to a meeting of the Security Council if she was the anonymous correspondent and responded, simply: "No."

James Dao, who runs the Times op-ed page, told CNN he received the article through an intermediary several days ago, calling the timing of piece's publication and the Woodward book "a coincidence."

The author's identity is known to the opinion page editors of the Times, the newspaper said.

On its podcast "The Daily," Dao said he was approached by someone he trusted about publishing the article. He told CNN he had spoken directly with its author, but did not elaborate.

In one eye-opening passage, the author said there was talk among members of the cabinet to invoke the 25th Amendment of the US Constitution, which provides for the removal of the president if he is "unable to discharge the powers and duties of his office."

In the end, they decided not to set off a constitutional crisis, and instead "vowed to do what we can to preserve our democratic institutions while thwarting Mr Trump's more misguided impulses until he is out of office," the person wrote.

Trump responded with fury, on Twitter and in comments at public events at the White House, calling it a "gutless editorial."

"Does the so-called 'Senior Administration Official' really exist, or is it just the Failing New York Times with another phony source?" Trump tweeted.

"If the GUTLESS anonymous person does indeed exist, the Times must, for National Security purposes, turn him/her over to government at once!"

The Times acknowledged the "rare step" of publishing an anonymous editorial but said the official's job would be jeopardized if they were identified.

"We believe publishing this essay anonymously is the only way to deliver an important perspective to our readers," the paper said.

The official's piece described a "two-track" presidency in which Trump says one thing and his staff consciously does another, citing the president's alleged preference "for autocrats and dictators."

"The root of the problem is the president's amorality," the official said.