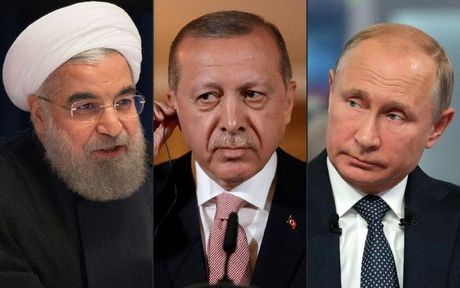 The leaders of Russia, Turkey and Iran on Friday discussed a step-by-step "stabilization" in Syria's Idlib, with a possibility of peace with some rebel groups, Russian President Vladimir Putin said after the talks.

"We have discussed concrete measures regarding a phased stabilization in the Idlib de-escalation zone, which stipulate... a possibility of making peace for those ready for dialogue," Putin said after the summit in Tehran to discuss the fate of Syria's last rebel bastion.

Putin said that Russia hopes that its "call for peace in Idlib zone as well will be heard... we will strive for peace among all warring sides, and we have never factored in terrorist organizations."

"We hope that representatives of terrorist organizations will have enough common sense to stop resistance and lay down (their) weapons," Putin said.

A joint statement released after the talks gave few more details on the plans for Syria's Idlib.

The communique said the leaders "took up the situation in (the) Idlib de-escalation area and decided to address it in line with... the spirit of cooperation that characterized the Astana format."

The three countries are guarantors of the Astana process, a track of talks on Syria's civil war launched after Russia's game-changing 2015 military intervention, which led to the creation of de-escalation zones.

While Iran and Russia back the regime of Bashar al-Assad, Turkey backs opposition fighters and has warned against an offensive on Idlib that could turn it into a "bloodbath."

Turkey's fate will be decided on this day as well. If they betray the rebels just to get even with the kurds, Turkey's economy will crumble further!

The three Turkeys in the picture....

patriotic 2 hours ago 70
he is busy at home while they work for him..

OMG, that’s the best joke of the year.

In case you haven’t noticed yet, potatotriotic, Bashar has a 4000 km long leash around his neck that goes from Damascus to the Fortress / Kremlin where his master controls him.

Obviously they all work for Assad. Putin at least does. This is what happened when Putin visited Syria, you can tell who's working for whom.

when was the last time you talked to Assad ya irani?

Yes true the killing of thousands of Syrians, displacement of over 2 million and the burden it has placed on the ailing Lebanese economy is s huge success for Arab and Islamic world ya Ali. so huge that Israel did not get one bullet fired at in anger and now Israel has decided to quite and leave.
Naharnet should have an age limit to the kids who can post here..seriously.

but only a few weeks ago you were saying Erdogan is a Wahhabi, ISIS, etc?