U.S. Plays Down Talk of Imminent Pullout of Forces from Syria 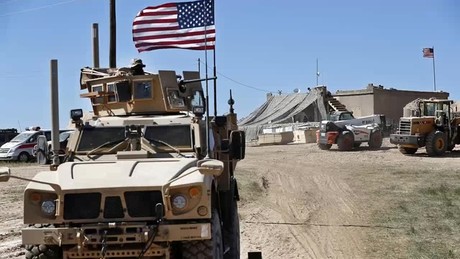 The Trump administration is now pledging the U.S. will remain in Syria until the "enduring defeat" of the Islamic State group, a move that could signal open-ended American involvement in the war-torn country.

The announcement "means we're not in a hurry to pull out," the U.S. special representative for Syria, James Jeffrey, told journalists in Washington Thursday, although he added that didn't necessarily mean a long-term American military presence in the country.

President Donald Trump has previously expressed a desire to get the U.S. out of Syria. There are roughly 2,000 U.S. troops deployed there, according to the Pentagon.

"We're no longer pulling out by the end of the year, we're going to stay in until we have an enduring defeat of (the Islamic State group)," Jeffrey said. The other pillar of U.S. policy was the complete withdrawal of all Iranian-commanded forces from Syrian territory, said the veteran diplomat, who was appointed last month.

Jeffrey's comments come as the government of Syrian President Bashar Assad, backed by Russia, prepares to retake the last pocket of territory of held by anti-government rebels, amid fears that could cause a bloodbath. An estimated 10,000 hard-core fighters, including al-Qaida-linked militants, are said to be hiding among 3 million civilians.

Jeffrey repeated a sharp warning to Russia, saying any offensive in the northwestern province of Idlib is "objectionable" and would be seen as a "reckless escalation." Jeffrey said a U.S. response to a Russian assault would involve "all of our tools," but did not elaborate further.

The U.S. and the United Nations have repeatedly warned that a Russian assault on the enclave would cause carnage the scale of which has not been seen in Syria's seven-year war. The leaders of Iran, Russia and Turkey are set to meet in Tehran on Friday, widely seen as a last chance to avert bloodshed.

In an effort to increase pressure on Assad, the U.S. Treasury Department announced Thursday it was imposing sanctions on four individuals and five companies that have facilitated weapons or fuel transfers, or provided other financial or material support, to his government. They include Muhammad al-Qatirji and his Syria-based company Qatirji Company, said to facilitate fuel trade between the Assad government and IS, and companies based in Syria, Lebanon and the United Arab Emirates that procure fuel for the government.

"The United States will continue to target those who facilitate transactions with the murderous Assad regime and support ISIS," said Treasury Secretary Steven Mnuchin said in a statement.

Trump campaigned on a pledge to keep the U.S. out of foreign wars and as president he made a number of statements saying it was time for American troops to "get out" of Syria.

The United States first launched airstrikes in Syria in 2014 at Islamic State group targets in the country's north, beginning a military intervention in the country that would steadily balloon over the next four years. In April Trump instructed military leaders to begin planning for a withdrawal from Syria.

Jeffrey said he was confident Trump now supported a more open-ended Syria policy. Jeffrey defined an "enduring defeat" of IS in Syria as creating the conditions where local communities can secure and govern themselves.

Trump administration officials have estimated that IS has been more than 90 percent defeated for months. A pocket of IS fighters remains in Syria and IS cells continue to carry out insurgent attacks inside neighboring Iraq.