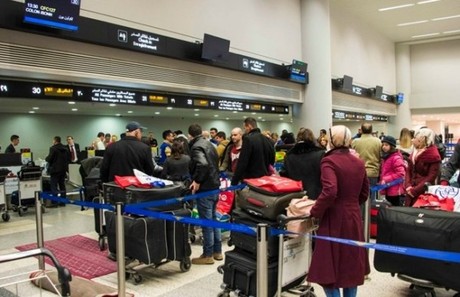 Judge Samir Hammoud has tasked on Saturday the Internal Security Forces Intelligence Branch to conduct investigation into the failure at Beirut airport which led to overcrowding of passengers flying from Lebanon.

A major failure in the baggage system at Rafik Hariri International Airport has left passengers stranded for hours in the terminal and inside planes after boarding.

A malfunction hit the baggage drop and passengers system operated by SITA, a multinational company providing IT and telecommunication services to the global air transport industry.

The Directorate General of Civil Aviation had issued a statement saying the system failure had occurred Thursday at 11:30 pm, resulting in a “total suspension of the registration process and congestion in the departure sections.”

In another statement, the Directorate clarified that SITA is the operator of more than 70% of the luggage registration systems around the world, including at Beirut's airport, adding that “the full responsibility for the malfunction falls on the company” and vowing to take “the necessary legal measures” against SITA.

Prime Minister-designate Saad Hariri on Friday summoned the caretaker ministers of public works, interior and finance as well as security and administrative officials to discuss the matter.

Hariri's move came after the head of the Central Inspection Bureau, Judge George Atiyeh, summoned to his office Fadi al-Hassan, the chief of the RHIA, and Civil Aviation Director General Mohammed Shehabeddine to question them over “the circumstances of the congestion that occurred overnight and at dawn at the airport,” the National News Agency said.

The airport management could have done manual luggage check in or let passengers travel and ship their luggage as soon as the system would be operational again. The airlines are also responsible for not having a plan B. I hope that those traveling to Europe or the US will get a compensation for the delay because I don't beleive the airlines booked them a hotel night or gave them proper meals . The airport management has been poor for the last 10 years.

Yes, there is a lot of good and smart working people and ground staff at the airport. BUT there are some few incompetent people managing or overseeing the whole operation and usually these people (mostly) who get there job directly from Berry, Harri, Nassralah or Jumblat or whoever big shot... Hence people are hired according to WHO they know not WHAT they know.
Our whole nation fails because the Brain Drain is always leaving... Leaving the most critical jobs to the Brainless who used a WASTA .... Tfe' on who ever gets a job using a Wasta... I have no respect for you!

Any employee at the airport is there because of a wasta. I have a distant relative working there, everyday the airport owned bus comes and picks her up some 50 kilometers away yet she has no qualifications whatsoever. She just had to kiss some blue hand... by you’re right to mention that most of these people are Shia just like EDL gangrened by Amal’s people who also don’t even hold the brevet...