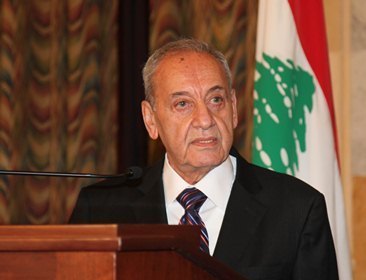 Speaking to his visitors, Berri was quoted as saying that “since everyone is traveling abroad, negativity is governing the Cabinet formation process,” he said, adding sarcastically “perhaps they agree abroad.”

On Monday, Aoun’s media office said the President has left to Strasbourg at the official invitation of President of the European Parliament where he will deliver a speech.

He is scheduled to make three foreign trips in the coming weeks whereas Hariri will leave for The Hague to follow up on the sessions of the Special Tribunal for Lebanon.

Moreover, Berri criticized the political rhetoric accompanying the formation, stressing the need to have a “sense of belonging and citizenship.”

He said: “The political call up which is accompanied by an unpleasant state of stirring up sectarian instincts, is a matter of concern. This pushes us to warn and reaffirm that we must learn from experience. I have always advocated reading one book, the Book of Citizenship, which unfortunately is missing.”

"I have always advocated reading one book, the Book of Citizenship, which unfortunately is missing.”

Has he read it himself?

bravo good news as always..
...any way even when there is a gov, all they do is steal, embezzle, and corrupt z country more n more!

And nothing can be done about it... The so called Clown government is a failure and they will simply do what they have done in the past threaten to name names and blame it on "others"...