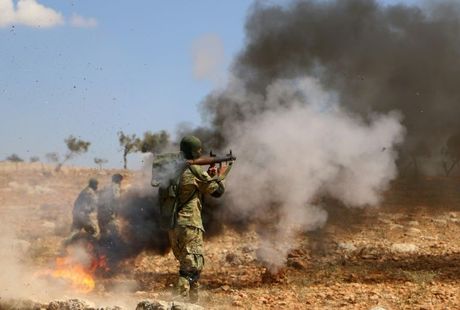 As troops massed for a Russian-backed offensive in the northwest, Kurdish-led rebels launched a US-backed assault in the east to oust the Islamic State group from its last redoubt in the Euphrates Valley, the US-led coalition confirmed.

The Britain-based war monitor did not immediately report any casualties from the bombardment which came after shelling and air strikes killed at least 15 civilians in the rebel zone since September 4.

The northwestern province and adjacent areas form the largest chunk of territory still held by the rebels, who have been worn down by a succession of defeats in other parts of the country.

Russia-backed government forces have been massing for weeks around Idlib, which is home to nearly three million people, many of them already dependent on aid.

UN agencies and relief organisations have warned repeatedly that any major assault could spark one of the worst humanitarian disasters of Syria's war.

"It is absolutely essential to avoid a full-scale battle in Idlib," Guterres said on Tuesday.

"This would unleash a humanitarian nightmare unlike any seen in the blood-soaked Syrian conflict."

- 'Security risks for Europe' -Ankara, which already hosts more than three million Syrian refugees, fears a new mass exodus and has called repeatedly for a ceasefire to give time for a negotiated settlement.

More than half of Idlib province is held by Hayat Tahrir al-Sham, a jihadist alliance led by Syria's former Al-Qaeda affiliate, and Turkey has warned a government offensive could scatter thousands of foreign jihadists abroad, posing a security threat to the West.

A major battle would trigger a "massive wave of refugees and tremendous security risks for Turkey, the rest of Europe and beyond," Turkish ambassador Feridun Sinirlioglu told the Security Council on Tuesday.

French Foreign Minister Jean-Yves Le Drian expressed strong support for the Turkish position, warning there were "many terrorists from other nations who could scatter" in the event of a joint Syrian-Russian offensive, posing "risks for our security".

France, the European country worst hit by a wave of jihadist attacks since 2015, has been on high alert for radicals returning home from areas of Iraq and Syria that have been recaptured from IS.

In the eastern province of Deir Ezzor, US-backed fighters fought to oust IS from the town of Hajin on the east bank of the Euphrates, the most significant remnant of the sprawling "caliphate" the jihadists once controlled spanning Syria and Iraq.

The operation "will clear remnants of (IS) from northeastern Syria along the Middle Euphrates River Valley toward the Syria-Iraq border," the US-led coalition said.

- 'He's been warned' -In Idlib, civilians and fighters have been scrambling to prepare for the looming offensive.

Western governments have said Damascus might again resort to the use of chemical weapons while Moscow has accused rebels of staging one as a pretext for Western intervention.

In a southern part of Idlib, a worried father busied himself making homemade gas masks, by stuffing gauze, cotton wool and coal into paper cups, then placing them in the corner of a large plastic bag.

"We've been hearing the regime and Russia threaten to bomb us with chemical weapons," said Hadheefa al-Shahhad.

"We had to make these masks to protect our women and children just in case," said the 27-year-old, who says he learnt how to make them by watching a video online.

On Tuesday, Russia claimed that Syrian rebels had begun working on film footage that would be presented to the world as the aftermath of an alleged chemical attack by the Syrian army.

Assad's regime has been repeatedly accused of using chemical weapons during the conflict and last year US President Donald Trump unleashed Tomahawk missiles against the regime's Shayrat airbase following an attack that killed more than 80 people.

After another alleged toxic attack outside Damascus in April, Britain, France and the United States also carried out retaliatory strikes.

Washington has spoken of far bigger reprisals if Assad orders any repetition.

"He's been warned, and so we'll see if he's wised up," US Defence Secretary Jim Mattis said on Tuesday.

Quote:
French Foreign Minister Jean-Yves Le Drian expressed strong support for the Turkish position, warning there were "many terrorists from other nations who could scatter" in the event of a joint Syrian-Russian offensive, posing "risks for our security".

Work for a balanced world just peace for all. Stop being selfish.