Astronauts Return to Earth from ISS amid U.S.-Russia Tensions 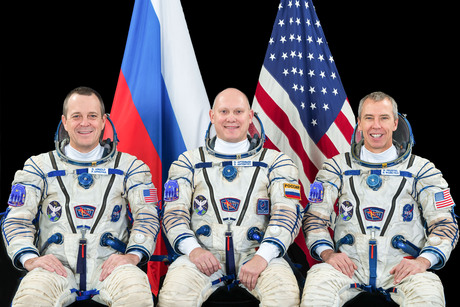 Two American astronauts and a Russian cosmonaut returned to Earth Thursday wrapping up a six-month mission at the International Space Station as tensions between Washington and Moscow threaten a rare area of cooperation.

NASA astronauts Drew Feustel and Ricky Arnold and Oleg Artemyev of Roscosmos touched down on steppe land southeast of the Kazakh town of Dzhezkazgan at the expected time of 1145 GMT.

The landing is the first since Russian space chief Dimitri Rogozin bemoaned "problems" in the Russian space agency's cooperation with NASA that he attributed to interference from unnamed American officials this week.

The outspoken official also said Russian investigators believed a small hole that appeared in a Russian space craft docked at the orbiting station in August causing an air leak on the ISS had been made deliberately.

Feustel has called the suggestion that the crew was somehow involved "embarrassing" and NASA on Wednesday expressed doubts over the theory that the hole was the result of sabotage.

The ISS is one of the few areas of tight Russia-U.S. cooperation that remains unaffected by the crisis in ties, including after Washington's sanctions against Russia over Ukraine and other crises.

The next launch from the Baikonur Cosmodrome in Kazakhstan is scheduled for next Thursday.

"I have had my 'glory days in the hot sun' and now it's time to come home," he wrote in a tweet late on Wednesday that included a photo of the sun taken from the ISS.