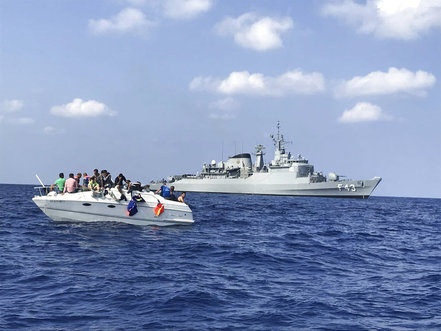 Cypriot police have said that most of the 29 Syrian migrants who have arrived to the Mediterranean island after setting sail from Lebanon told authorities they have relatives living on Cyprus.

Police said that the migrants, including five women, nine children and one unescorted minor, have so far made no requests for asylum after being taken to a reception center on the outskirts of the capital, Nicosia.

The 29 arrived Friday by boat at Cape Greco on Cyprus' southeastern tip.

Cyprus officials say the tiny country of 1.1 million people can hardly cope with a burgeoning number of asylum-seekers.

On October 12, the Lebanese navy and UNIFIL rescued 32 Syrian refugees whose boat broke down as they attempted to reach Cyprus.

The Lebanese military said 32 Syrians and a Lebanese citizen were aboard the craft, and were attempting to reach the eastern Mediterranean island "illegally."

Humanitarian representatives and government officials say the number is likely much higher, since many Syrians who have fled to Lebanon are not officially registered with the United Nations.

In September, EU member Cyprus announced it was looking to broker a repatriation agreement with Beirut because of an increased influx of migrants from Lebanon.

Take the quisling and his clan too please!

good riddance if SOS terrorist is among them with his trolls