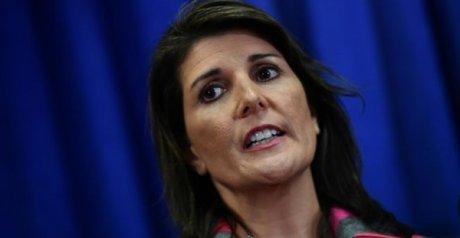 Facing condemnation for its decades-old embargo on Cuba, the United States will on Thursday try to shift the focus at the United Nations to the communist government's human rights record.

The General Assembly is set to vote on a draft resolution presented by Cuba calling for an end to the US embargo -- an annual exercise since 1992 that has won overwhelming support.

In a shift, US Ambassador Nikki Haley this year has presented eight amendments that criticize Cuba's human rights record, hoping to counter calls for ending the embargo by drawing a spotlight on repression.

"Every year Cuba puts forth a resolution that blames Cuba's poverty, repression, and lack of freedom on the United States," the US mission to the United Nations posted on Twitter Wednesday.

"Tomorrow the UN will hear what we have to say about that and countries will have to vote between Cuba or the US. Who will vote with us?"

The United States has been lobbying countries to support criticism of Havana's rights record in a bid to downplay its isolation at the United Nations over its Cuba policy.

Last year, the resolution calling for an end to the embargo was adopted by a vote of 191 to 2. The United States and Israel were the only two countries that voted "no".

That vote took place after Washington for the first time abstained in the vote in 2016 as former president Barack Obama pursued a thaw in relations with Havana.

Ties between Cuba and the US have been in decline under President Donald Trump, who succeeded Obama, Cuban President Miguel Diaz-Canel said in September.

During several hours of debate on Wednesday, ambassadors took to the podium to declare their opposition to the US embargo, imposed in 1962.

South African Ambassador Jerry Matthews Matjila told the assembly the US amendments were "clearly an attempt to obscure from the serious human rights violations that are being imposed under the embargo against the people of Cuba."

North Korea's Ambassador Kim Song accused the United States of seeking regime change in Cuba while Iranian Ambassador Gholamali Khoshroo called the embargo "the most unjust and longest-lasting unilateral sanctions imposed against a country in our modern world history."

The vote on Thursday will mark the 27th year that the assembly has called for an end to the embargo by adopting the resolution, which is non-binding but carries political weight.

Cuban Foreign Minister Bruno Rodriguez, who is due to address the assembly on Thursday, has accused the United States of seeking to toughen the embargo by using human rights violations as a pretext.