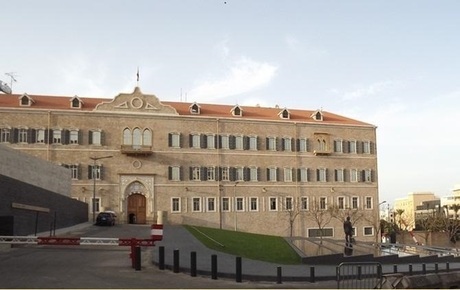 Pessimism regarding the Cabinet formation grew on Tuesday in the absence of consultations to ease the latest hurdle hampering the formation process, amid concerns the delay could persist until the end of the year, al-Joumhouria daily reported on Wednesday.

Not a single proposal to ease the obstacle was made, meanwhile officials traded accusations of delay, said the daily.

Prime Minister-designate Saad Hariri, currently in Paris, is waiting for Hizbullah to submit the names of its ministers. In the aftermath, he will immediately meet with President Aoun in the presence of Speaker Nabih Berri to issue the needed decrees.

Meanwhile, Hizbullah and its allies believe that Hariri must allocate a ministerial seat for a Sunni MP of March 8, which the PM strongly refuses.

In light of the complexity delaying the formation, warnings that the delay has negative repercussions affecting the country’s economy and financial situation continue, it added.

“The political arena witnessed yesterday a kind of collective retreat from dealing with the governmental situation. Officials and political circles did not raise any new idea that would steer the gridlock. Meanwhile, the Premier is not expected before next Wednesday,” said the daily.

wow great all great in Lebanon so no worries we can watch the Tonite show featuring hasaballa rock band lead by great singer assasino victory of ghost...

The achievements of Aoun are obvious.

Exactly Justin, the quisling president has historically been a bad manager. He mismanaged the Army, the nation and now has little credibility to go forward. The opposition is not willing to trust him neither are his Kizballah partners who we should notice have been deadly quiet about the situation. Bashar in syria is obviously pulling the strings and nothing will move without his approval. Clown is not one who is able or capable to move the country forward hence the status quo.

No worries Guys, the CEDRE conference donors will wait patiently as Hariri has agreed to split funds among them! ;)
If u don't know how it works, I tell u:

@Hariri: Hey Guys can you approve some loans to Lebanon?
@Bankers: Well, Sure we can! But it's 50%|50%
@Hariri: how?
@Bankers: each 1 billion approved you return 500 million to private Companies accounts that we'll appoint as receivers.
@Hariri: sounds good but, who will pay the loan in full??
@Bankers: of course it's your country stupid! Actually, nobody will pay, Lebanon will simply accumulate the debt...
@Hariri: well, I like the idea, will talk to my superiors in the Government and get back to you soon!
@Bankers: sure.

Welcome to the new reality of financings (public debt is the best strategy to money laundering).
One must ask: why the hell would Banks approve loans at lower rates to a country that's already indebted to death??
Answer: Money laundering.

Sorry Libanaise but this is not new, Money laundering has its roots as far back as the civil war itself. However this new government is trying to legalize it. Now that Iran will be feeling that the world is breathing down its neck we will see a lot more of it. Kizballah is not moving in iota without Irans consent which its hesitant to give not knowing how it will need to operate. Syria is still licking its wounds and trying to figure out what to do being a recipient of Irans Petro dollars. A vacuum will continue to exist till Iran or Syria have figured out what to do.

Alternative Banking is the ultimate solution, and I believe everyone has figured it out long before sanctions were imposed.