Parts of Lebanon Go on Strike to Protest Economic Conditions 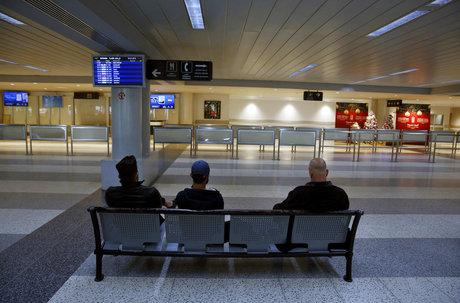 Parts of Lebanon's public and private sectors have gone on strike called for by the country's labor unions to protest worsening economic conditions and months of delay in the formation of a new government.

Friday's strike was called for this week by the General Confederation of Lebanese Workers, with the backing of the new cross-sectarian Sabaa Party. The veteran Progressive Socialist Party and Kataeb Party have also voiced support for the move.

Beirut's port was closed, as were several other state institutions, such as the National Social Security Fund and the electricity company, which had the gates to its compound closed with chains.

Flights stopped for an hour in the morning at Beirut's Rafik Hariri International Airport.

However, Mohammed Shuqeir, head of the chambers of commerce, industry and agriculture that represent the private sector, said that Friday is a normal work day.

The whole nation has been on strike for the last couple of years. Soon the railroad workers will be on strike too lol.

That Chamber represents nothing but Almustaqbal (KSA) interests in Lebanon. Private sector has nothing to thank it for! It does nothing but creating events and useless tools to charge fees from business owners, apart of that all they do is signing useless MOUs that constitute nothing but empty promises of prospective investors.

The theme for whatever this was should be what if they called for a strike and almost no one answered. The people are jaded, broke and have to work. It was business as usual in most of the private sector.