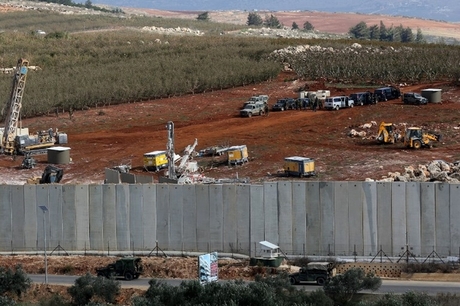 An Israeli tank was positioned behind a dirt cover in the settlement of Misgav Am while the Israeli forces resumed digging and installing cement blocks along the technical fence in the outskirts of Adaisseh village in Marjayoun, the National News Agency reported on Thursday.

The enemy deployed a number of soldiers while the Lebanese Army and the international emergency forces patrolled the area, NNA added.

New threats emerged between Lebanon and Israel over several issues, including the wall the Jewish state is building along the border that Beirut says may jut into Lebanese territories, as well as plans for oil and gas exploration in the Mediterranean.