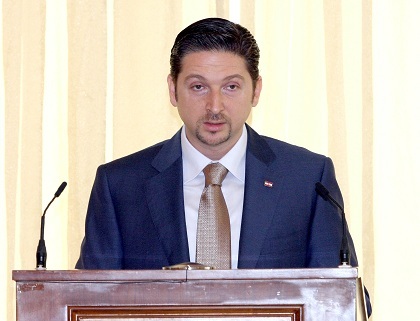 The Consultative Gathering, a grouping of six Hizbullah-backed Sunni MPs, on Thursday voiced support for calls to postpone Beirut’s upcoming Arab economic situation to ensure Syria’s participation in it.

“Avoiding the invitation of Syria to the summit is not beneficial for Lebanon, which has endorsed the dissociation policy,” MP Faisal Karami announced after the Gathering’s periodic meeting, saying “it is okay to postpone the economic summit until Syria regains its normal place in the Arab League.”

Speaker Nabih Berri, another ally of Hizbullah and Damascus, had voiced a similar stance on Wednesday.

As for the issue of the stalled government, Karami said the Consultative Gathering is “not concerned with any ideas that have not been directly presented to it.”

“The only solution is in the hands of the PM-designate who is not practicing his constitutional powers,” Karami added.

“The Gathering has not asked President Michel Aoun to cede a minister from his share and the initiative came from him, but we were surprised that the concession was conditional, which strips it of its concessional nature,” the MP went on to say.

Karami, however, announced that the Gathering maintains its “positive stance on the presidential initiative despite its interruption.”