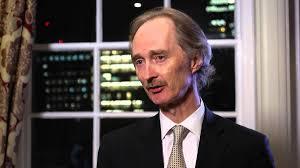 The new U.N. envoy to Syria ended his first visit to the war-torn country Thursday, stressing the need for a U.N.-brokered political solution to the eight-year conflict.

The new envoy on Twitter late Wednesday said he had a "constructive meeting" with Syrian Foreign Minister Walid Muallem during his stay in Damascus.

During it, he stressed the need for a "Syrian-led and -owned political solution facilitated by the U.N.", he added.

Pedersen, who started his new job last week, is the fourth U.N. envoy to seek a solution to Syria's conflict, after endless rounds of failed U.N.-brokered peace talks.

In recent years, U.N.-led efforts have been overshadowed by separate negotiations led by regime allies Russia and Iran, as well as rebel backer Turkey.

After Damascus, Pederson said he was off to meet the Syrian Negotiations Committee, Syria's main opposition group.

But he "agreed to come back to Damascus on a regular basis to discuss commonalities and progress on points of disagreement", he added.

On Tuesday, Muallem expressed Syria's "readiness to cooperate with him... in his mission to facilitate Syrian-Syrian dialogue with the objective of reaching a political solution to the Syrian crisis," a foreign ministry statement said.

Pederson takes over from Staffan de Mistura, a Swiss-Italian diplomat who stepped down at the end of last year over "personal reasons."

Officials in the government of President Bashar al-Assad had set the tone for the new envoy's tenure shortly after his appointment was announced in October.

De Mistura ended his four-year tenure with an abortive push to form a committee tasked with drawing up a post-war constitution.

Syria's war has killed more than 360,000 people and displaced millions since the war started with the repression of anti-government protests in 2011.

With key military backing from Russia, Assad's forces have retaken large parts of Syria from rebels and jihadists, and now control almost two-thirds of the country.

A drive to bring the Syrian regime back into the Arab fold also seems underway, with the United Arab Emirates reopening their embassy in Damascus last month.

Paris is abandoning its centuries-long quest to mount a rival to the eclipsed English Empire. It has no pawn in the Middle East comparable to England's "Kingdom of Saudi Arabia" and KSA offshoots across the Arab Peninsula, but on the other hand, France is not limited in its ambitions by a "common law" tradition of grass-roots democracy. Smaller European imperial vassals like Norway ("Nobel Peace Prize") are now choosing neither the English nor the French model, but instead responding to the rise of democratic values across the world and slowly backing away from their own glorious imperial pretensions, such as the "Oslo Accord" which sought to legitimize Zionist racism in Palestine.

Abbas we would love to have the same political process as Norway but unlike Norway, Sweden and Finland (Iran and Syria) do not enact their will upon the Norwegians and hence they do not have the same political impasse as Lebanon. Interesting to note how you tied things back to draw on your hatred of Zionism in your dissertation. Just remember in today's Lebanon and its not Israel but Iran and Syria that pose the greatest threat to us. But to fair to you when I was a teen I thought that the whole world was wrong too.

I've been to the whole world, a little bit, here and there, and most of it is watching the White Elite Racist Establishment Which Otherwise Loves Freedom, WEREWOLF, crawling, gasping, choking. Think of Hillary Clinton bragging on CBS News about destroying Libya: "We came, we saw, he died, heh, heh, heh, heh, heh," referring to Gaddafi, and there was a real satanic gleam in her eye and grin on her face. She wasn't kidding. The whole world isn't racist. Only a tiny sliver of it has this worst of all addictions, which is an expensive one. It'd be nice to appraise people without knowing them, but I can't afford it.