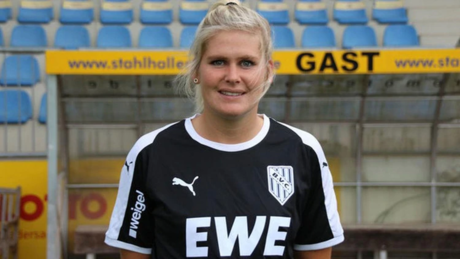 The first woman to coach a men's team in one of Germany's top five leagues is tackling sexism by sarcastically suggesting her selections are based on penis lengths.

Former Germany women's Under-20 midfielder Imke Wuebbenhorst was last month appointed head coach of the men's team at BV Cloppenburg, who currently sit bottom of the Lower Saxony Oberliga in the fifth tier of German football.

When German newspaper Welt jokingly asked whether she sounds an alarm on entering the dressing room, to ensure her players cover themselves up, the tough-talking blonde gave a cutting answer.

"Of course not, I am a professional -- I base my selections on penis lengths," the 30-year-old replied sarcastically.

Having hung up her boots in 2016 after a career which saw Wuebbenhorst twice win the European title with Germany's Under-19 team and played in the women's Bundesliga for Hamburg, she ended up coaching the women's side in Cloppenburg after playing for the team.

She refuses to see herself as a pioneer for other women.

"The topic bounces off me. I want to be judged on performances, not on whether I'm a woman or a man," she told Cloppenburg's website.

"I don't have a problem commanding authority -- I'm a teacher."

The presence of a female head coach in Germany's lower leagues has attracted plenty of media attention, but Wuebbenhorst is focused solely on the task in hand.

"We only have 12 games left to stay in the league. It's going to be a tough job," she said.

"Several of my peers have described my new task as a suicide mission, and asked me why I do such a thing, but other clubs are not exactly lining up for me.

"The only fear I have is that a relegation would be blamed on the fact that I am a woman."