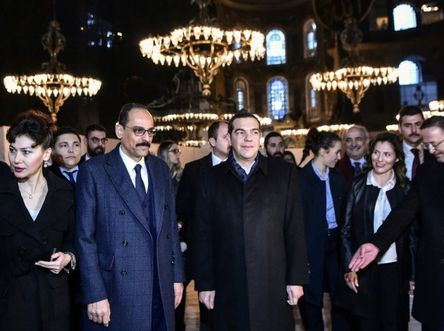 Greek Prime Minister Alexis Tsipras on Wednesday visited the Hagia Sophia, an iconic and disputed landmark in Istanbul which has recently been at the centre of tensions between Athens and Ankara over Muslim activity.

The symbolic visit by a Greek leader to the former church and mosque that is now a museum came on the second day of Tsipras' first visit to Turkey in four years.

"You can feel the burden of history here," Tsipras told AFP.

The Greek premier listened enthusiastically as a guide accompanying the delegation explained the history of the edifice.

The Hagia Sophia was first built as a church in the sixth century under the Christian Byzantine Empire as the centrepiece of its capital Constantinople, today's Istanbul.

Almost immediately after the conquest of Constantinople by the Muslim Ottomans in 1453, it was converted into a mosque but then became a secular museum in a key reform of the new post-Ottoman Turkish authorities under Mustafa Kemal Ataturk in the 1930s.

Ataturk was the founder of the Turkish republic.

But today the museum is regularly at the centre of disputes between Christians and Muslims over Islamic activities organised there such as the reading of verses from the Koran or collective prayers.

Since Turkish President Recep Tayyip Erdogan's Justice and Development Party (AKP) came to power, critics and advocates of secularism fear the government harbours a hidden agenda to reconvert the Hagia Sophia into a mosque.

But Turkey's top court in September last year rejected an association's demand that the Hagia Sophia be opened for Muslim prayers.

Greece, which closely follows the future of Byzantine heritage in Turkey, has repeatedly expressed concern over efforts to change the museum's status.

The Greek premier and Erdogan on Tuesday agreed to resolve disputes between their two countries, whose history is fraught, through dialogue.

Tsipras will later attend a religious service with Orthodox Patriarch Bartholomew of Constaninople at the Greek Orthodox Halki seminary, located on Heybeli island off Istanbul.

It is the first visit to the service at the seminary by a Greek prime minister since it was closed in 1971 by the Turkish government during tensions between Athens and Ankara over the Cyprus issue.

Future priests of the Constantinople diocese had been trained at the seminary.

Turkey, a Muslim-majority country, has in recent years returned the land seized from Halki in 1943 back to the seminary but its reopening is not planned.