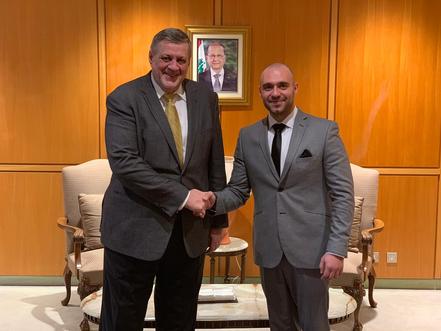 Ján Kubiš arrived Monday in Beirut to take up his new position as United Nations Special Coordinator for Lebanon, his office said.

"I am extremely honored to be received some three or four hours after my arrival to the country by His Excellency the Minister of Foreign Affairs and other high officials of the country. I take this as a very positive gesture. I take this also with a feeling of indebtedness, if you wish, because I feel I need to quickly reciprocate it by working together as excellent partners with both the country and the new government to make us even more relevant," Kubiš said.

"We, the U.N. and UNSCOL -- which I will be heading as of now -- we have a long history of working together with Lebanon and a long history of being of help and assistance to Lebanon. I can only pledge that in my work and the work of my colleagues we will do our best not to continue but to reinforce and to bring this partnership and cooperation to the next level, notably as regards the implementation of all our mandates, notably Resolution 1701 but also in working together with other parts of the United Nations to be a good and trusted partner of the country," he added.

The U.N. official had been received by an official from the Ministry of Foreign Affairs at the Beirut Rafik Hariri International Airport.

“I am very pleased to be here in Beirut at a time when Lebanon is also embarking on a new phase after the formation of the government,” Kubiš said on arrival.

“I look forward to supporting this renewed momentum in close partnership with the Lebanese authorities, political leaders, civil society and other partners in Lebanon and the international community towards a process for sustainable peace, security and stability in Lebanon,” the Special Coordinator added.

U.N. Secretary-General Antonio Guterres announced the appointment of Kubiš, who hails from Slovakia, on January 9.

He brings with him many years of experience in diplomacy, foreign security policy, and international economic relations, both internationally and in his own country.

Plus he needed a job and he was reliable.