Arslan from Baabda: No Refugee Solution without Clear Relation with Syria 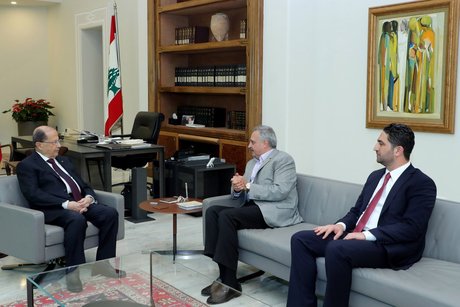 Lebanese Democratic Party leader MP Talal Arslan on Monday stressed that there can be no solution for Lebanon's refugee crisis without a “clear and frank relation with the Syrian state.”

Arslan voiced his remarks after meeting President Michel Aoun along with Saleh al-Gharib, the new State Minister for Refugee Affairs.

“No one can resolve the refugee crisis without coordination with the Syrian government,” Arslan underscored, noting that “the refugee file must not be subject to the moodiness of domestic politics.”

“Minister Saleh al-Gharib will address the refugee file in coordination with the international community and the Syrian state, because this issue requires inevitable solutions,” Arslan added.

“It is the top priority of President Aoun and the government and there will be total openness towards anyone who would effectively contribute to finalizing this file,” Arslan went on to say.

The issues of restoring ties with Damascus and the repatriation of Syrian refugees are highly controversial in Lebanon.

Some parties, especially Druze leader Walid Jumblat, have expressed dismay over the allocation of the refugee affairs ministry to the pro-Damascus new minister.

Arslan: No Refugee Solution without Clear Relation with Syria - pure blackmail and extortion.

The lap canine that he is is only echoing his masters voice...