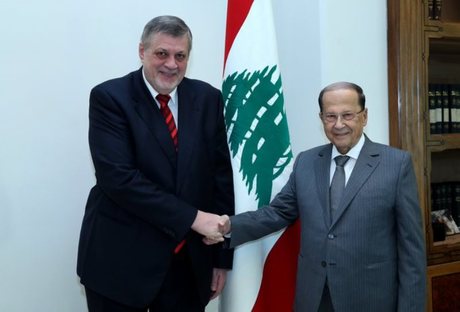 President Michel Aoun has met with UN Special Coordinator for Lebanon Ján Kubiš at the Presidential Palace in Baabda, the National News Agency reported on Tuesday.

After the meeting, Kubiš said: “I used the opportunity to congratulate His Excellency on the fact that now the government is in place. I expressed also my hope that today and tomorrow’s session of the Parliament will take the next necessary steps.”

“But the most important message was to confirm that we, as the United Nations system and UNSCOL, will continue our cooperation with and support to the programs of the government. We will try to facilitate also discussion on how to resolve certain issues that are very much under the mandate given to us by the UN Security Council Resolution 1701. I informed His Excellency that in the second half of March there will be another discussion of the Security Council on the report of the Secretary General on the implementation of this resolution,” he added.

“I once again recommit the UN system to work in very close partnership with both the authorities of the State and with the people of the country to be a partner and facilitator in all the areas important for the country,” said Kubiš.

He concluded: “We discussed also the regional context, not only in relation to Israel but also the developments in the broader region starting with Syria and not least the situation of the Syrian refugees and the need of the international community to facilitate both the humanitarian situation but also to help development, social development, economic development, investment problems of the government.”

Ján Kubiš arrived Monday in Beirut to take up his new position as United Nations Special Coordinator for Lebanon.

I wonder what they said about Israel.