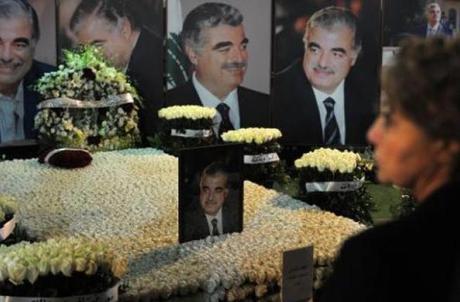 Lebanon marked the 14th anniversary of slain former Prime Minister Rafik Hariri who was assassinated in a massive and shocking suicide bombing in 2005 that destabilized the country.

A torch sculpture, that is part of a memorial that includes a statue of Hariri, was lit near the St. Georges Hotel where the blast went off at exactly 12:55 pm.

Lebanese Forces leader Samir Geagea meanwhile tweeted that “justice will come, even if it takes some time.” He also posted a picture of Rafik Hariri and the blast scene.

Ex-PM Najib Miqati for his part reminded of Hariri’s well-known statement, “No one is bigger than their country.”

“National unity should be our ultimate goal, away from the approach of force, hegemony and intimidation. No one can be fully righteous and there is no right outside real national partnership,” Miqati added.

Former Interior Minister Nouhad al-Mashnouq said “14 years later, it still pains them that, where we walk in Beirut, you will find one of his achievements.”

“We are all trying, topped by Saad Hariri. We will not grow tired or surrender,” Mashnouq added.

The Feb. 14, 2005 assassination killed Hariri and 21 others and wounded more than 200 people, stunning a nation long used to violence.

The charismatic billionaire businessman was Lebanon's most prominent Sunni politician. Although a divisive figure, he was credited with rebuilding downtown Beirut after the ravages of the 1975-90 civil war.

The massive explosion that tore through his convoy on the Beirut seaside 12 years ago sent a tremor across the region and unleashed a popular uprising that briefly united the Lebanese and ejected Syrian troops from the country. But despite millions of dollars spent, justice remains elusive in a case that has been overshadowed by more recent turmoil.

Five Hizbullah suspects are being tried in absentia by the Special Tribunal for Lebanon based in The Hague.

Yet his son is allied with and protects the very criminal iranian militia that killed his father.

I think the point with Saad is being missed by us all. He is not in this role to serve the nation, government in Lebanon has become a business and Saad is simply trying to get the fringe benefits of being in senior management. We expect a lot more than they ever will deliver simply because we have a greater affinity with the dream of Lebanon's independence and sovereignty than these businessmen will ever have.