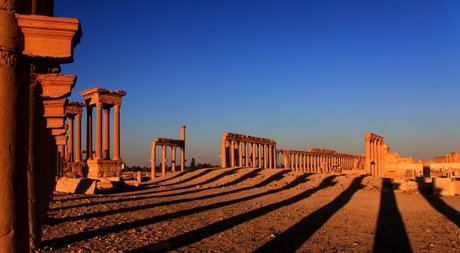 After eight years of brutal war in Syria, the UNESCO World Heritage-listed city of Aleppo lies in ruins -- but a vast digital archive in Germany aims to keep its memory alive and help rebuild it one day.

The Syrian Heritage Archive Project documents what it can of the millennia-old history of a part of the world that saw some humanity's earliest urban centres and writing systems, but which has become a symbol of the barbarity of war.

The special exhibition opening in Berlin on Thursday features a digital treasure trove of photographs, maps and films as well as artefacts to take visitors on a virtual journey through Aleppo and other cultural marvels of Syria.

"This project aims to preserve the past and also has a vision for the future: to gather archives so that reconstruction can happen quickly," said Stefan Weber, director of Berlin's Museum of Islamic Art, which is hosting the exhibition until May 26.

"For over 100 years, our museum has had a special connection with Syria," said Weber, a Damascus University graduate in modern Arabic, pointing to the 17th-century Aleppo Room, a wealthy merchant's dining room that is a centrepiece of the permanent exhibition.

The archive exhibition, partially funded by the German foreign ministry, is one of several such initiatives -- alongside a digital map of pre-war Aleppo's Old Town created by Germany's Cottbus University, and 3-D models of key sites made by a French IT startup.

To create the mammoth archive, a German-Syrian research team painstakingly analysed and scanned images of pre- and post-war Aleppo, then catalogued and compiled them all into a vast database.

Beyond Aleppo -- Syria's second largest city and traditional commercial capital -- the 300,000 digitised documents also include images and data on ancient villages of northern Syria, as well as the towns of Raqa and Palmyra.

To fill in the white spaces on the huge cultural mapping project, a team of 24 Syrian and Iraqi refugees will guide their compatriots through the exhibition in order to collect any information they may be able to contribute.

Germany, with its dark and painful history, has plenty of experience with urban reconstruction, rebuilding entire city centres after World War II, and again renovating decrepit ex-communist urban areas after the fall of the Berlin Wall.

Weber said he knows it will take time to see Aleppo reborn, and that "it will be up to the Syrians themselves to decide what they plan to do with their cultural heritage with what we make available to them".

The war, which has claimed more than 350,000 lives, has by some estimates cost the country three decades of economic development. The UN has estimated the damage at nearly $400 billion (345 billion euros).

More than two years after President Bashar al-Assad's Russia- and Iran-backed troops fully reclaimed Aleppo from rebels forces, much of it still lies in ruins, leaving many residents in unstable and unsafe homes.

One war-damaged building collapsed on February 2, killing 11 people inside, among them four children.

Existing reconstruction initiatives are mainly carried out by private individuals, while the state authorities are focusing on infrastructure.

To help wider reconstruction, "the museum already sent a file last year to UNESCO, which has transferred the elements to the Syrian authorities," said Karin Puett, a historian with the project.

She stressed that the initiative has no "direct contacts with the authorities", just with the researchers and scientists involved.

The dossier facilitated the launch of a major reconstruction project: Aleppo's Umayyad Mosque, one of the oldest in the world. Work to rebuild its minaret, a jewel of Islamic art destroyed in April 2013, began last August.

Information on the project is available at www.project.syrian-heritage.org