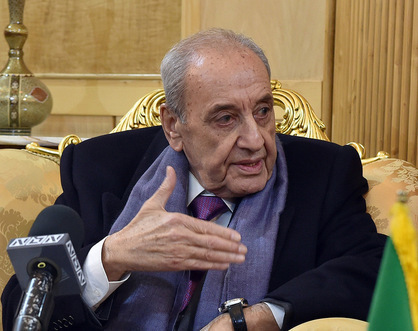 Lebanon’s oil wealth file will be the focal point of discussions between Speaker Nabih Berri and U.S. Secretary of State Mike Pompeo during the latter’s expected visit to Beirut next week, al-Joumhouria daily reported on Thursday.

Sources in Ain el-Tineh (Berri’s residence) told the daily that the disputed maritime border file between Lebanon and Israel will be “strongly present” in the meeting between the two.

They stressed that the Speaker adamantly rejects a proposal related to the so-called Hoff line, and adheres to Lebanon's full right and wealth of oil and gas that Israel is trying to invade.

The Frederick Hoff line is known after a US envoy to Syria and Lebanon drawn in 2012 and gives Lebanon 60 percent of the offshore oil Block 9 and gives Israel 40 percent.

Berry is dreaming if he thinks he can strong arm Pompeo. The money for the resistance will have to come from another source

Why can't Berri talk to the Israelis about this? Simple, he knows that they won't pay him any money under the table.

why not, did bibi and his friends get it all and there's none left to pay off berri?

Berri should mind his own business. He does not and should not dictate government policy. This matter should go to International Arbitration and not be used to justify the terror militia's existence.

someone tell mr berri that there is also a maritime border in the north between lebanon and syria and lebanon's substantial oil wealth there some studies have it as greater than in the south. the syrian government is eyeing it. will mr berri fight to preserve this lebanese wealth or will he do what he's always done and help the syrians get their hand on it