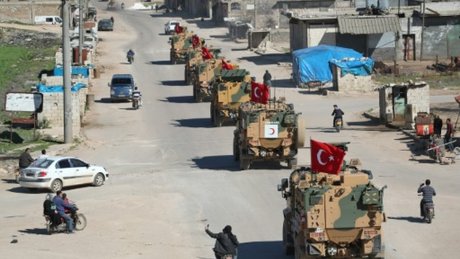 Regime ally Russia and Turkey, which supports rebels, have been on opposite sides in the Syrian war.

But Turkish President Recep Tayyip Erdogan and Russia's Vladimir Putin have been working closely to end the fighting. A Russian-Turkish deal for a demilitarised zone last year protected the Idlib rebel bastion.

The two countries and Ankara are already preparing joint patrols around the northwestern Syrian region.

"We are working on a joint coordination centre," Turkish Defence Minister Hulusi Akar said after a meeting Wednesdayg, according to a ministry statement on Thursday.

His remarks came as Russian jets carried out air strikes in Idlib on Wednesday, the first such attacks since the Turkish-Russian deal was signed in September as a way to prevent major bloodshed.

At least 13 civilians, including six infants were killed in the raids, according to the Syrian Observatory for Human Rights, a Britain-based monitor that relies on sources inside Syria.

Earlier this month, Turkey said its forces and Russians would begin ground patrols around Idlib province as part of their ceasefire deal.

HTS in January took control of the administration of Idlib's region where three million people have been protected.

The Russian-Turkish agreement was supposed to see hardline jihadists withdraw from Idlib  but they never did.

The ceasefire has held except for sporadic bombardments and skirmishes, avoiding an all-out Syrian military assault.