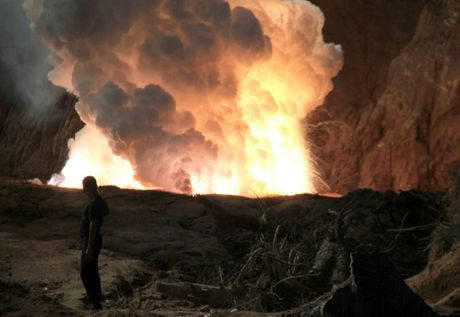 Indonesian police said Thursday they had uncovered a huge stash of explosives linked to a terror suspect whose wife blew up herself and a child following a dramatic standoff at their home.

The discovery of some 300 kilograms (660 pounds) of assembled explosives and bomb-making materials raised fears that a major attack was being planned, a month before national elections and less than a year after Indonesia was rocked by a wave of deadly suicide bombings.

The suicide blast early Wednesday morning came after police had arrested the husband, Abu Hamzah, who was identified as a member of Jemaah Ansharut Daulah (JAD).

The Islamic State-linked jihadist network has been blamed for attacks last May in Indonesia's second-biggest city, Surabaya, the deadliest in years to rock the world's biggest Muslim majority nation.

Officers surrounded the arrested militant's home in Sibolga on Sumatra island when the confrontation began.

During a nearly 12-hour standoff, the wife lobbed an explosive device at security personnel, wounding a police officer, authorities said.

They later found parts of a woman's corpse and that of at least one child. Police initially said they thought two of the couple's children might have been killed.

Police said they uncovered a large cache of bombs and explosive materials in the couple's home and another in the same city.

"A total of 300 kilogrammes of bombs and bomb-making materials were discovered," Prasetyo said.

On Thursday, police destroyed materials in a controlled explosion in a field.

University of Indonesia terrorism expert Stanislaus Riyanta said the large stash hinted that a serious attack was being planned.

"This is frightening," he told AFP.

"The impact of bombs depends on the materials used. But this amount -- 300 kilogrammes -- if used all at one time, could certainly be very destructive and deadly, especially in a densely populated area."

The arrest of Hamzah, who police said was a skilled bomb maker, comes days after authorities arrested two other terror suspects in other parts of the country. Police said all three were connected.

Last year, two families carried out attacks at churches in Surabaya, killing a dozen people and children of the attackers, including two young girls.

On Thursday, a Jakarta court sentenced several militants linked to the Surabaya bombings with prison sentences ranging from about three to 10 years.

Since the 2002 Bali bombings, which killed over 200 people including scores of tourists, Indonesia has seen a string of deadly attacks that have tested its long-held reputation for religious tolerance.