Strong Lebanon Bloc: Our Principles More Important than Any Understanding 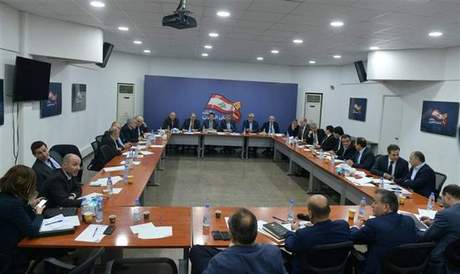 The Free Patriotic Movement-led Strong Lebanon bloc stressed Tuesday that its “stances and principles” are more important than any understanding with any political party.

“The presidential settlement and all our understandings are for production, not bickering,” Strong Lebanon secretary MP Ibrahim Kanaan said after the bloc's weekly meeting.

“We are the keenest on the government's productivity, but this does not mean that we should not express our opinion and voice the necessary motivation for everyone, including us,” Kanaan added.

“Urging the government to boost its productivity is not targeted against anyone,” he emphasized, after recent remarks by FPM chief MP Jebran Bassil sparked a war of words with Prime Minister Saad Hariri's al-Mustaqbal Movement.

“The political relation with al-Mustaqbal Movement, on which the presidential settlement was based, is not linked to the stances we are voicing, and the principles that we carry are more important than any understanding,” Kanaan went on to say.

Tensions had surged between the FPM and al-Mustaqbal in recent days after Bassil threatened to topple the government if it does not address the issues of refugees, electricity and corruption in a swift manner, and after he lashed out at the Brussels conference on refugees.

"Our Principles More Important than Any Understanding"

A street walker has more principles than you.

The street walkers have grown tired of being compared to this sleazy lot.

Good one plus a street walker earns his/her money the hard way unlike these con artists.

What principles? They couldn't even follow "their principles" when electing their own president. Alain Aoun the candidate preferred by the rank and file was strong armed to pull out by his uncle in favor of the uncle's favorite candidate.

The only principles these crooks have are to fill their pockets as much as they can in a minimum of time. Everything else is secondary...

What is strong about Lebanon? Is it it's economy, army, services, or happiness index?