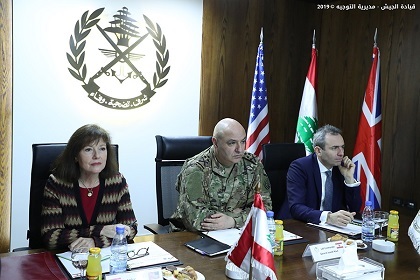 Army Commander General Joseph Aoun held talks on Thursday with British Ambassador to Lebanon Chris Rampling and US Ambassador Elizabeth Richard to discuss progress on the security of the Lebanese-Syrian border, during the High Level Steering Committee (HLSC).

“I was delighted to meet today the Commander of the Lebanese Armed Forces General Joseph Aoun and the US Ambassador and discuss progress on our Land Border Project. The project is now in its eighth year and the LAF should be rightly proud of their achievement in controlling and securing the Lebanese – Syrian border. It is because of this progress that we were able to open up the UK Travel Advice for Lebanon in December.

I reiterated to the Commander the UK’s steadfast support to Lebanon through ongoing social, economic, educational and humanitarian projects, in addition to further support to the Lebanese Armed Forces and other security agencies. The LAF remains the sole legitimate defender of Lebanon.

We remain proud partners of the Lebanese army and we look forward to strengthening our military and security relations even further.”