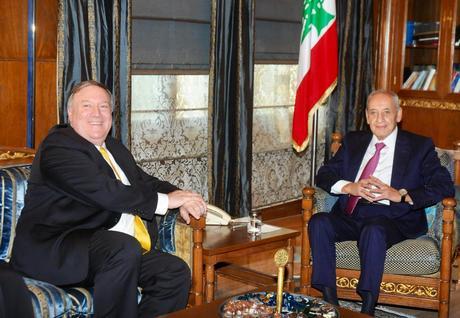 U.S. Secretary of State Mike Pompeo’s visit to Lebanon was important in terms of “putting an end” to a suggestion by former U.S. official Frederick Hoff on the demarcation of the maritime border between Lebanon and Israel, sources close to Speaker Nabih Berri said.

The suggestion “was based on Lebanon’s acceptance to renounce its right to the maritime Block 8, which covers over 800 square kilometers of its Exclusive Economic Zone,” the sources told Asharq al-Awsat newspaper in remarks published Sunday, noting that Lebanon had rejected that proposal.

“Another important thing in Pompeo’s visit is that it revived a previous agreement that the U.N. would bring together representatives of the sides on its table, under its flag and chairmanship and in the presence of the U.S. mediator in order to confirm Lebanon’s right and demarcate the maritime border,” the sources said.

The sources added that the new negotiations will kick off “when the U.S. mediator lays out a practical plan.”