Aoun Meets Putin, Thanks Him for 'Defending Christians' 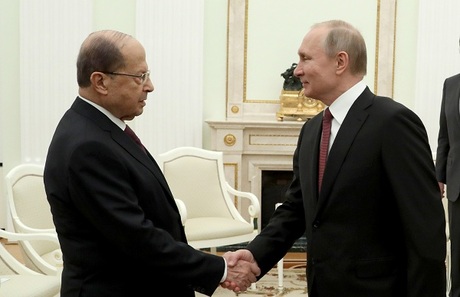 President Michel Aoun on Tuesday held talks in Moscow with his Russian counterpart Vladimir Putin during which he thanked him for “defending” the Christians of the Middle East.

“We thank you for your stances that defend the Christian minorities in the Levant and we hope you will continue this help,” Aoun told Putin during the Kremlin meeting.

“We met several economic figures and agreed with them on issues that might be vital for our future,” the president added.

“The decision to annex the Golan contradicts with the U.N.'s international laws and we regret that such a decision has been taken,” the president added.

Putin for his part described Lebanon as a “traditional and old partner” for Moscow in the Middle East.

“We maintain our ties with your country's leadership and with the representatives of all political forces,” he added.

Putin also noted that the 75th anniversary of the establishment of diplomatic ties between Russia and Lebanon will be marked this year.

He is the president of a country with 17 sects yet he went to Russia to thank putin for 'defending christians'?

The Christians!? Putin couldn't care less! He defended the Syrian regime and his bases in tartus and Latakia! The only ones they have in the region!
He was bombing the FSL in priority at the beggining of the war. Not Isis!
Putin NEVER cared for the Christians of Lebanon for example!