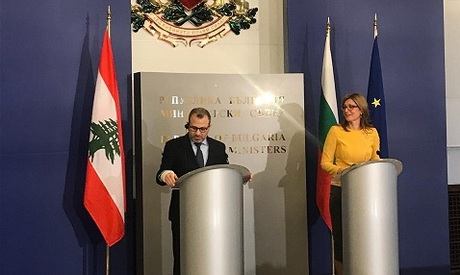 Foreign Minister Jebran Bassil stressed Friday that the Israeli-occupied Shebaa Farms and Kfarshouba Hills are “Lebanese land,” during a visit to Bulgaria.

“This land is Lebanese and our people have proved their ability to preserve their rights. Occupation will not have a place on our soil,” Bassil said, responding to a reporter's question on the fate of the Shebaa Farms and the Kfarshouba Hills in the wake of the U.S. recognition of Israel's sovereignty over Syria's Golan Heights.

Asked whether he intends to visit Syria, Bassil said: “It will happen at the right time and according to Lebanon's interests, in a manner that would lead to opening lifelines through Syria for the Lebanese economy.”

According to the National News Agency, Bassil held talks in Sofia with Bulgaria's president, parliament speaker and foreign minister.

“The meetings focused on the political and economic files between Europe, Lebanon and the Middle East in general, in addition to the bilateral ties with their economic, political and cultural aspects, on the eve of the Bulgarian president's visit to Lebanon,” NNA said.

“As for the Syrian refugee file, it was the most discussed topic in Bassil's talks with Bulgaria's top officials,” the agency added, noting that Bassil's Bulgarian counterpart informed him of her support for “the Lebanese stance that calls for resolving the refugee crisis through securing a safe and dignified return for them to their country.”

More waste of taxpayer's money! What in the world is he doing visiting Bulgaria, the Czech Republic, etc with an entourage of advisors!

Seriously, who is Bulgaria on the world stage and what impact does it have on the refugees file? This is pure corruption and disregard for any form of accountability.

So what are you waiting for: Instead of liberating Aleppo Go liberate them and stop your demagoguery!

"with 81 different maps being studied; the UN concluded that there is no evidence of the abandoned farmlands being Lebanese(...)The small farms in this area have not been used since the Six-Day War in 1967. "United Nations Secretary General

But the ImBassil knows better...

Countless visits to Damascus, and no lebanese president or premier has had the guts to ask Syria about demarcation of the border. Now its too late, Im afraid.

The farms are not Lebanese and and saying they are is an excuse to justify the existence of the iranian sectarian terror group as 'resistance'. It is also a way for bassil and his father in law before him to submit their presidential credentials to hezbollah, iran, and syria.

Another excuse to keep Lebanon under Hizbullah occupation and prevent the country to blossom.