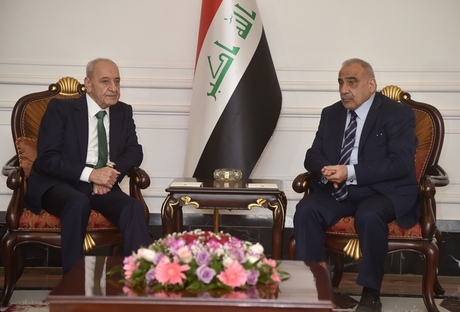 Berri, who arrived in Baghdad on Sunday on an official visit, highlighted Israel’s violations of Lebanon’s land and maritime border, the “difficult” economic situation in the country and highlighted Iraq’s ability to mediate a reconciliation between Saudi Arabia and Iran.

“The Israeli enemy has greed for our waters, but we will not give up one cup of it. That’s what I told the US Secretary of State Mike Pompeo. We were able to triumph over Israel because of our unity, and we were also capable of triumphing over Daesh and terrorism. Victory would have been very difficult if it was not for our unity,” Berri told the gatherers.

On Iraq’s role in the region, the Speaker said: “One of the most important reasons for my visit to Iraq is that it is a national and religious duty, but it is also meant to say that Iraq can play a major and more effective role at the regional level.

“It can strengthen its opening-up policy, and play a bigger role in reconciliation even between Saudi Arabia and Iran, thus strengthening its internal front and its external role,” he said.

Berri arrived Sunday in Baghdad at the invitation of his Iraqi counterpart Mohammed al-Halbousi, who cut short a foreign trip in order to receive him.

Berri is scheduled to meet with the country’s top officials and with Shiite spiritual leader Ayatollah Ali Sistani.

We face a major Economical crisis, and it is probably because of the Israeli violation of our air space..

This thug is one of the main reasons Lebanon is facing a major economic crisis.

the main reason for the Economical crisis is the corrupted politicians who only care about filling their pockets and doing nothing to simulate the economy buy spending the money and long term projects that create jobs etc...

Dudes.. what the hell went on in that meeting.. look at them.. I've seen more jovial people.. at a funeral!..