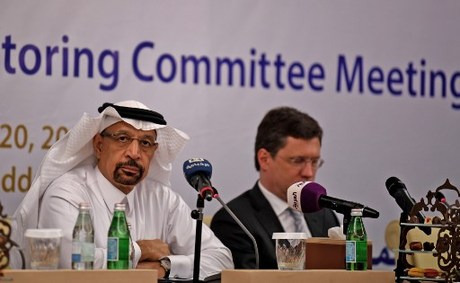 Saudi Energy Minister Khalid al-Falih said on Monday the oil market was "moving towards balance", and that producers may not need to make additional output cuts.

As oil prices hit a five-month high at more than $70 a barrel, Falih told a conference in Riyadh that non-OPEC member Russia and other countries have met their production cut obligations.

Falih said he did not "think we need to" when asked if the kingdom was prepared to make additional cuts to support the oil market.

"I think the market is moving towards balance," he said.

The Saudi minister however insisted that it was still premature to say that a crucial meeting in June for OPEC and its allies will extend the 1.2 million barrels per day cuts.

The 25-member group, called OPEC+, agreed to cut output by 1.2 million bpd from the beginning of 2019 after oil prices dipped by more than 30 percent late last year.

The oil producers have been debating whether it was necessary to extend the cuts beyond the June deadline or even make additional cuts.

The Saudi minister said the subject will be discussed at a key OPEC+ meeting in Jeddah next month.

Falih said Russia, the main non-OPEC producer, and others like Iraq, Kuwait and the UAE have met their obligations for production cuts.

"The implementation once again is moving in the right direction ... the market is coming back to health," Falih said.

The minister said that the main objective of the OPEC+ countries remains to bring down the level of global inventories as the "market is sensitive to inventories."

Although the level of inventories has dropped in the past few months "they are substantially above what is a normal level," Falih said.