Banners Appear in Beirut 'in Support of Jon Snow' 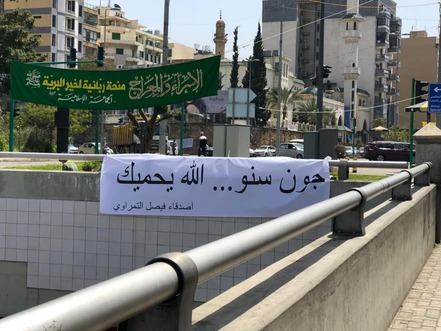 Banners “backing” Jon Snow, a main character in the blockbuster TV epic 'Game of Thrones', have appeared in several Beirut streets in a humorous show of support.

“Beirut's Residents Back Jon Snow in His Battle against the White Walkers”, reads one of the banners.

“Jon Snow, May God Protect You”, says another one mimicking banners usually addressed to Lebanese politicians.

A third banner read: “Cersei Lannister... Be Wise... Our Strength Lies in Our Unity”.

Timrawi commented on Facebook on the removal of one of the banners in the Salim Salam area.

“He who removed the banner in Salim Salam better put it back.. or else I swear to God, I swear to God I will install another,” Timrawi said.

Pictures of the banners have gone viral among Lebanese social media users and Game of Throne fans.