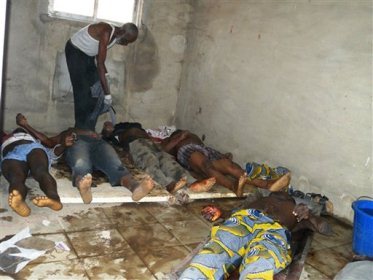 The killings took place late Saturday in Biu town of the northeast Nigerian state of Borno. The area is one of several placed under emergency rule by a presidential decree last week.

Two gunmen on a motorcycle shot into a crowd of Christians playing cards at an abandoned hotel near a church on the outskirts of the town, killing three and wounding seven others

"The gunmen, believed to be members of Boko Haram, riding a motorcycle, opened fire on a group of Christian residents playing poker outside the abandoned Honeymoon Hotel near EYN church and killed three people," Ba'na Ubaidu, a resident, told Agence France Presse.

Biu is about 200 kilometers (125 miles) south of Maiduguri, the homeground of Boko Haram and capital of Borno state.

"They just fired into the group of about 15 people playing cards, and killed three people," Shamaki said, adding that seven people were wounded.

"The attackers fled into the bush and disappeared. They are by all indications members of Boko Haram," Shamaki said.

More than 80 people, mainly Christians, have died in a spate of attacks blamed on Boko Haram since Christmas Day in Nigeria.

I am a moslem and I think these savages have no relation to islam. They should be eradicated by all means!

Where is Dr. Geagea when the Christians of the East, the West and everywhere else need a protector? Converting to Crazy Sunni Islam and hallucinating like the idiot that he is?

Again it is up to Muslims to attack these criminals and extradite them from the islamic faith.
They commit these crimes in the name of Islam and they are prompted by verses from the quran and other from the Hadith to support their acts. they are mostly ignorant youth who are prompted by what they hear in the mosques.
It is no longer acceptable to deny only that these acts are non islamic. It is time to sincerely axtract from Islam what is used by these people for there atrocious deeds. Only Muslims can fix this problem....

Only muslims can fix this problem? why are we responsible for what happens in nigeria? are you responsible for when nigerian christians murder muslims? are you responsible for the serbian churches who blessed the terrorist militias who raped and massacred tens of thousands during the war on muslims? Clean your own house before you talk about others. Nobody has spilled as much blood on earth as christians have. Nobody. If you care about your christian brothers in nigeria (which you dont, you only want to talk bad about islam) then go help them but we all know the truth, you would never marry a black woman, you would never even eat with these nigerian christians let alone visit their country so do us all a favour and shut up with your hypocrisy.

lebaneso... it is the responsibility of all people to fix this problem starting with the main stream sunni muslems. this extremism must be completely unacceptable within society and anyone who is an extremist and believes that killing civilians can be religiously justified is a freak and should be broken, shunned, exiled and destroyed. What happened in the balkans was civil war that ended when christian armies intervened on the muslim side. Christains have already cleaned house and will continue to keep it clean. so too should the Sunni muslems clean out the fanatics from with in their society. Which really means cleaning out saudi arabia.... the terrorist banker.

LOL adou....just LOL.... wow, i am amazed you did not link hariri also to murdering christians in nigeria, well done. But, you managed somehow to link saudi arabia....heheheheh! you are a piece of work, aren't you! So, you know it is "sunni main stream" who is behind murdering christian nigerians, huh?

Its not sunni main stream. It's fanatical extremists, which hide within mainstream communities. They are also most often funded through saudi arabia. You can laugh all you want, but innocent Christian civilians are being murdered in iraq, Egypt and nigeria by crazy extremists, who get away with it because of attitudes like yours... denial or outright acceptance of these crazy lunatics within their communities.