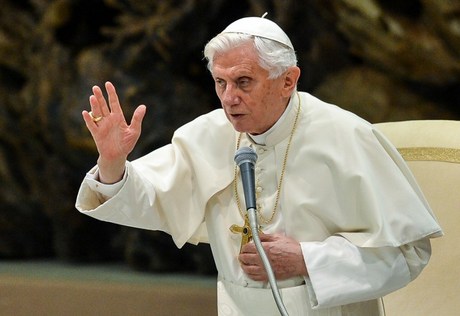 Former pope Benedict XVI on Thursday blamed the Catholic clerical sex abuse scandals on the 1960s sexual revolution and a collapse in faith in the West, immediately drawing criticism from some theologians.

The ex-pontiff, who retired in 2013 and chose to be known thereafter as "pope emeritus", said responsibility for the crises rocking the Roman Catholic Church globally from Australia to Europe lay with the fight for an "all-out sexual freedom, one which no longer admitted any norms."

He asserted that pedophilia "reached such proportions" because of the "absence of God."

"Part of the physiognomy of the Revolution of '68 was that pedophilia was then also diagnosed as allowed and appropriate,"  Benedict -- born in Germany as Joseph Ratzinger and turning 92 next week --  wrote in a 6,000-word essay for Klerusblatt, a German monthly magazine for clergy.

Benedict, who was the first pontiff to resign in almost 600 years, said the direct consequence of the 1960s period of counterculture and sexual activism in Europe and America was the "collapse of the next generation of priests in those years and the very high number of laicizations" or priests leaving the Church.

Back before his elevation to the papacy in 2005, when he was Cardinal Ratzinger, he headed the Vatican department that investigates sexual abuse

Some theologians were quick to criticize Benedict's analysis of the causes of clerical paedophilia, which appeared to go against efforts by his successor Pope Francis to deal with the Church's global abuse crisis.

"The idea that ecclesial abuse of children was a result of the 1960s, a supposed collapse of moral theology... is an embarrassingly wrong explanation for the systemic abuse of children and its coverup," Flanagan tweeted.

Benedict's contribution comes after Pope Francis in February hosted a landmark conference on how to deal with pedophilia within the Church, vowing at the end of the meeting an "all-out battle" against abusive priests.

Vatican expert Joshua McElwee wrote in the National Catholic Reporter that Benedict's letter "does not address structural issues that abetted abuse cover-up, or Benedict's own contested 24-year role as head of the Vatican's powerful doctrinal office."

The German ex-pope said in his essay that the sexual revolution also led to the "establishment" in various seminaries of "homosexual cliques... which acted more or less openly and significantly changed the climate."

Benedict criticized a seminary in Germany where trainee priests and lay ministers lived together.

"At the common meals, seminarians and pastoral specialists ate together, the married among the laymen sometimes accompanied by their wives and children, and on occasion by their girlfriends," Benedict wrote.

"The climate in this seminary could not provide support for preparation to the priestly vocation. The Holy See knew of such problems, without being informed precisely."

Benedict recalled one bishop who "arranged for the seminarians to be shown pornographic films, allegedly with the intention of thus making them resistant to behavior contrary to the faith".

Doris Reisinger, a German former nun and abuse victim, said "It's hard to believe he really wrote this."

"This letter is deeply disturbing on so many levels. Unbelievable," she tweeted.

The Church was first rocked by the child sex abuse crisis in the second half of the 1980s, particularly in the United States, and it has been repeatedly criticized for protecting pedophile priests and its reputation.