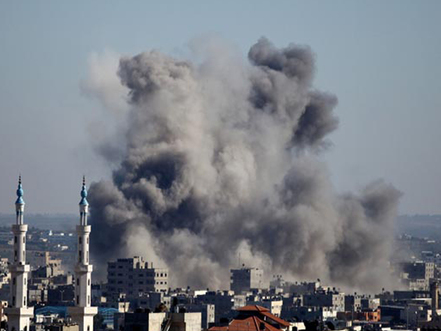 This came a day after a similar attack on the capital killed another four civilians and injured 20, according to the GNA.

Haftar's LNA launched an offensive against Tripoli, the seat of the internationally-recognised GNA, on April 4.

After initial gains, Haftar's forces have encountered stiff resistance on the southern outskirts and his troops have been pushed back in some areas.

At least 278 people have been killed and more than 1,300 wounded in the clashes, according to a toll released Wednesday by the World Health Organization.

The GNA accuses Haftar of using foreign planes to carry out air strikes, without naming a country of origin.

"The toll may rise given that victims have been transported to private hospitals."

The parts of Tripoli struck were Abou Slim, a densely-populated residential area in the south, and Ain Zara, a southern suburb that has seen several violent clashes in recent weeks.

A spokesman for the LNA confirmed Saturday's strikes on the capital, but said they were aimed at military targets.

"The capital is experiencing an escalation in the military offensive, war crimes, and indiscriminate bombings of residential areas, public facilities and infrastructure," Mohanad Younes, a spokesman for the GNA, said on the government's Facebook page.

"Unmanned foreign planes participated in these raids, the latest ones having hit homes in Ain Zara and Abou Slim," said Younes.

The responsibility for these acts, he added, rests "with the states which support the belligerent forces of the criminal Haftar".

Haftar's offensive has sharpened fault lines in policy towards Libya among world powers.

On April 18, Russia and the United States opposed a British bid backed by France and Germany at the UN Security Council to demand a ceasefire in the North African country.

The White House revealed the next day that Donald Trump had reached out personally to Haftar in a phone call, during which the US president "recognised Field Marshal Haftar's significant role in fighting terrorism and securing Libya's oil resources".

The country has been mired in chaos since the NATO-backed uprising that deposed and killed dictator Moamer Kadhafi in 2011.