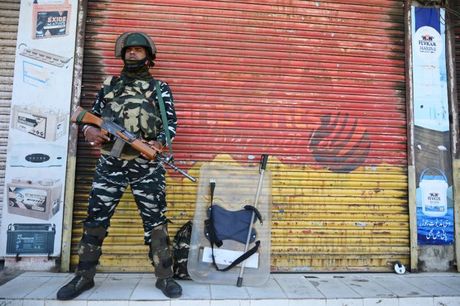 India held the next stage of its marathon election on Monday, with 90 million people eligible to vote in key seats for Prime Minister Narendra Modi's party and security heavy in restive Kashmir.

The world's biggest poll has been plagued by violence, with militants throwing a grenade at a voting booth Monday and shooting dead a local politician in south Kashmir over the weekend. Last week 15 paramilitaries and their driver were killed in an attack by Maoist rebels in Maharashtra state.

India's mammoth electorate of 900 million vote on seven days between April 11 and May 19 -- Monday marking the fifth day -- with results due on May 23.

At the 2014 election, Modi's Bharatiya Janata Party (BJP) won 39 of the 51 constituencies up for grabs on Monday, as he swept to power and the opposition Congress party suffered its worst ever result.

These include 14 seats in Uttar Pradesh, India's most populous state with 220 million inhabitants, part of the backbone of Modi's support.

But late last year Congress won state elections in three other states in the region, boosting its hopes of unseating the BJP.

"Your father was termed 'Mr Clean' by his courtiers, but his life ended as corrupt number 1," Modi told a rally, linking Rajiv to a major defence purchase scandal during his tenure.

"Your Karma awaits you. Projecting your inner beliefs about yourself onto my father won't protect you. All my love and a huge hug," Gandhi tweeted in response.

During the campaign Gandhi has called Modi a "thief" over alleged irregularities in a multi- billion dollar deal to purchase 36 Rafale fighter jets from France's Dassault Aviation.

Also voting were parts of the unsettled region of Indian-administered Kashmir, with tens of thousands of extra security forces on duty in India's only Muslim-majority state.

Militants on Monday threw a grenade that exploded near a voting booth, although no one was injured.

On Saturday night Gul Mohammad Mir, who belonged to a local unit of Modi's BJP, was shot dead at his house in south Kashmir.

Protestors in the Pulwama area of Kashmir threw stones at election staff Sunday as they were brought under heavy security to the polling stations.

Police fired at the crowds injuring at least two people, and polling staff were later transported in helicopters for their safety.

Voter turnout in Indian Kashmir -- where thousands have died in clashes in recent decades, most of them civilians -- has barely crossed 10 percent.

Also voting Monday was Amethi, home to some 1.5 million people and the seat of Congress leader Gandhi, long considered an electoral stronghold for India's Gandhi-Nehru political dynasty that has given the country three prime ministers since independence in 1947.

Amethi is one of the two constituencies where Rahul is contesting, something that is allowed under Indian election rules -- the other is Wayanad, in the southern state of Kerala, and an easier bet.

Rahul's mother Sonia Gandhi, 72, the Italian-born former head of Congress, was contesting from Rae Bareli near Amethi, which is also voting on Monday.

Modi has made national security and fighting terrorism his main campaign theme to blunt opposition attacks on his economic record.

He is seen as favourite to win -- albeit with a reduced majority, meaning Modi may have to seek alliances with other parties.

"I’m not happy with the current government," said voter Mohammed Anees in Leh in the Ladakh region, high in the Himalayas in India's far north. "We want a change."