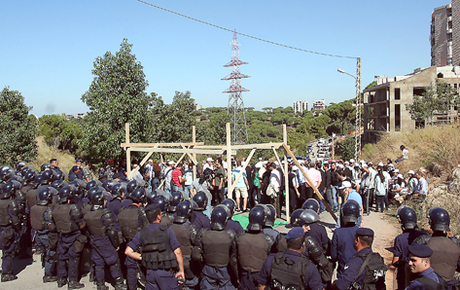 After scuffles with security forces a day earlier, residents of the North Metn town of Mansourieh resumed their protests on Wednesday rejecting a government plan to install high-voltage power lines in their area.

The residents blocked the highway of Beit Mery amid heavy presence of security forces, said the National News Agency.

“This protest will keep on going until a solution to this issue is found,” they said, noting that they plan to escalate their moves if their demands are not met.

On Tuesday, the residents scuffled with security forces and workers of the Electricite du Liban who embarked on the installation of the lines.

"The World Health Organization has warned of a potential danger in the presence of high-voltage lines. As long as the solution exists we will not accept these lines to be installed,” they said.

Energy Minister Nada al-Bustani has stressed in remarks on Tuesday that the plan will carry on.

The residents argue that the controversial project to connect a power plant in Mkalles to another in Bsalim to supply more power to the region is dangerous on public health and call for the installation of the lines underground.

The Ministry of Energy argues that the electricity lines have no health risks on the residents.

MP Elias Hankash “regretted the use of force against the people,” and voiced calls on President Michel Aoun and Patriarch Beshara al-Rahi to “intervene.”