UN Security Council to Meet on Libya amid Offensive on Tripoli 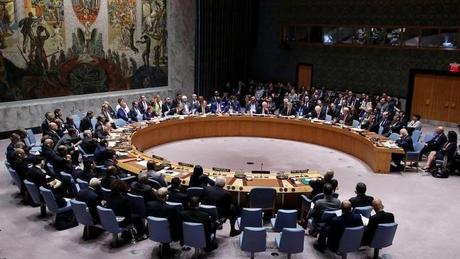 The UN Security Council will meet behind closed doors to discuss the humanitarian crisis in Libya as a month-long offensive on the capital grinds on, diplomats said on Thursday.

Britain requested the Friday meeting so a UN aid official could brief representatives on the assault that has displaced 55,000 people and left more than 430 dead, the diplomats said on condition of anonymity.

Libyan commander Khalifa Hafter, whose forces hold the east of the country, launched the offensive on April 4 to seize Tripoli, seat of the UN-recognized government.

The council has been divided over how to respond to the crisis in Libya, forcing Britain to put on hold a draft resolution demanding a ceasefire.

France welcomes Haftar like a president .... they’re the ones who gave him legitimacy. Of course they only wish to destabilize Libya in order to steal its natural resources just like it has been doing in Africa since the 19th century. They ruin lives but don’t want to welcome refugees they forced to migrate . Of course, the UK, Germany, The US, China and other nations are all doing the same thing.

Maybe you are right about the first part, but you cannot say that they do not migrants

Of course they aren’t welcoming migrants. You should see how those who made it lived in the Calais Jungle which has been dismantled. These refugees are often repatriated against their will to Serbia, Africa, Afghanistan &c. They don’t want the migrants because they’re racists.

Its true that France took in thousands of folks from all over their old colonies and are now paying a huge fee for it. France is rapidly changing due to this and many argue not for the better. In fact many pity the French nation but Karma is an SOB lol.