Report: Obama Tells Mubarak Not to Run for Re-Election 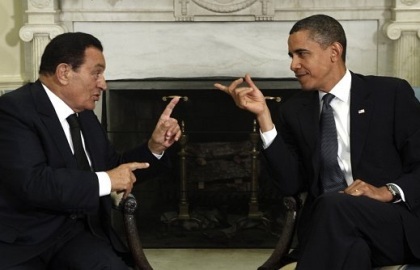 The message from Obama was conveyed by former U.S. ambassador to Egypt, Frank Wisner, who was dispatched to Cairo on Monday by the U.S. administration, the influential U.S. daily said, quoting American diplomats.

"Mr. Wisner's message, they said, was not a blunt demand for Mr. Mubarak to step aside now, but firm counsel that he should make way for a reform process that would culminate in free and fair elections in September to elect a new Egyptian leader," the Times wrote.

It added that Wisner met Tuesday with the Egyptian leader and was now on his way back home.

The Times said the back channel message had been authorized directly by Obama, who on Tuesday called a high-level White House meeting of his national security team to address the fast-evolving crisis.

It would appear to signal that the administration is withdrawing support from one of its closest regional allies.

Earlier, Tuesday the U.S. ambassador to Egypt spoke to the country's top dissident Mohammed ElBaradei in another apparent sign Washington is looking to the post-Mubarak era.

Ambassador Margaret Scobey spoke to the former globe-trotting diplomat for the first time since he flew back to Egypt last week.

Tides of protesters flooded onto the streets of Cairo and Alexandria Tuesday for the eighth day demanding that Mubarak should step down after 30 years in power.

Scobey's conversation with ElBaradei, who has become the leading public critic of the Mubarak government, came as part of her outreach to various opposition groups, a U.S. official told Agence France Presse on condition of anonymity.

Reacting to the media reports that Mubarak may not stand in September polls, U.S. Senator John Kerry, head of the Senate Foreign Affairs committee, said such a move "would be very well received providing it's accompanied by the other structures that are needed.

"But it's a very good step if that happens," he added.