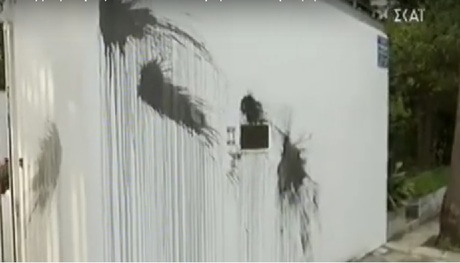 Greek radical anarchists on Wednesday threw paint outside the home of the American ambassador to Greece in support of a jailed far-left assassin, the group said.

"I woke up to more childish vandalism this morning outside the residence and will continue to work with Greek authorities to punish the culprits according to law," ambassador Geoffrey Pyatt said in a tweet.

"Destruction of property is not peaceful protest".

The vandalism was claimed by radical anarchist group Rubicon in support of Dimitris Koufodinas, a jailed prominent member of the far-left Greek extremist organisation November 17.

A video posted by the group showed a group of motorcyclists throwing black and red paint at the residence's outer enclosure.

Police have detained nine people in connection with Wednesday's incident.

Rubicon has carried out a host of similar attacks on foreign embassies in recent years.

Koufodinas, the organisation's main hitman who is serving multiple life sentences, went on hunger strike on May 2 after a request for temporary leave from prison -- permissible by law -- was denied.

Six prior requests were granted by authorities over the last two years, prompting strong criticism from the US and British embassies and the families of November 17's victims.

"Prison furlough is a conquest won with blood, not a concession," Rubicon said on Wednesday, accusing the US embassy of exerting pressure on Greek authorities to reject Koufodinas' request.

Anarchists in recent days have carried out a vandalism spree in Athens and the northern city of Thessaloniki in support of Koufodinas.

November 17 launched dozens of attacks between 1975 and 2000 that killed 23 people, including the CIA station chief in Athens, several prominent Greek businessmen, Turkish diplomats and the British military attache.