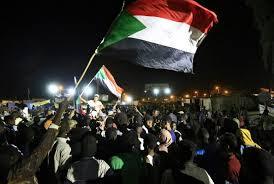 At least eight people were wounded by gunshots near a Khartoum sit-in Wednesday, a spokesman for Sudan's protest movement and a witness said, ahead of crucial talks on civilian rule.

Protest leaders responded by urging people to join the demonstrators but to avoid clashes.

"Eight wounded from live bullets so far," Amjad Farid, a spokesman for the umbrella protest group the Alliance for Freedom and Change wrote on Facebook.

A witness told AFP that gunshots had been fired near the protest camp outside army headquarters in central Khartoum.

"There are gunshots in Nile Street and around the sit-in and we are seeing several wounded," said Mohamed Dahab, a volunteer at a field clinic at the protest camp.

A protest leader also said on condition of anonymity that among the eight wounded, three were in serious condition.

The Sudanese Professionals Association, the group that launched the protest campaign against now-ousted leader Omar al-Bashir initially in December, urged people to join the sit-in in support of those who have camped there round-the-clock for weeks.

"We call on everybody to join the sit-in immediately and support the protesters," the SPA, a group of doctors, engineers and teachers, said in a statement.

"We are calling on revolutionaries to restrain themselves, be calm and peaceful and avoid any confrontation or clash with any group whatever the circumstances," it said.

The latest violence comes hours ahead of crucial talks between Sudan's ruling military council and protest leaders, aimed at finalising the make-up of a new body to govern for a three-year transition period.