Bassil: We Insist on a Better Budget Even If It Takes Time 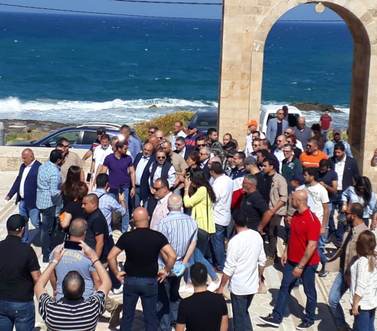 Foreign Minister Jebran Bassil on Saturday began a tour in North Lebanon where he was welcomed by Minister of Justice Albert Serhan, Deputy George Atallah and by crowds of citizens and supporters.

“We are working to launch the reform through the state budget,” said Bassil, and referred to the suggestions he made during a Cabinet meeting on Friday which he said his bloc “insists on” in order to “end up with a better budget.”

“We insist to come up with a better budget even if it takes time,” he said.

On criticisms that he is delaying the approval of the budget, Bassil said: “They accuse us of delaying the budget because they want a normal one. They actually agree with our suggestions but prefer postponement.”

Bassil made suggestions during the Cabinet session which reportedly infuriated Finance Minister Ali Hassan Khalil at the end of the session expressing his dismay over having to repeat the draft budget several times.

He also suggested that revenues from some of the airport's activities go to the treasury rather than to MEA.

Bassil.. Bassil.. Bassil.. Gebran.. Gebran.. Gebran.. no time for real works.. All raleighs.. all the time... Sponsored by the Lebanese ministry of foreign affairs.. and the Lebanese presidency... Catered by Clémentine SAL... Come one.. come all... Free snacks and refreshments will be served... mostly orange powdered drinks.. and imitation orange soft drinks.. and ..Chicken à l'Orange.. AKA.. General Aoun Chicken.. bites... To celebrate when the pappy in law did NOT run away in his skivvies.. but was teleported.. along with some loot.. to the French embassy... The skivvies were Made in France Eminence.. with special camouflaged print..

Typical FPM mentality that makes of a demagogue thief a 'smart' leader.

Can someone remind this fine gentlemen that they are debating this year’s budget and more than half of it has been spent already, so they are basically just wasting time?

lool @ 'the advantages of Bassil'