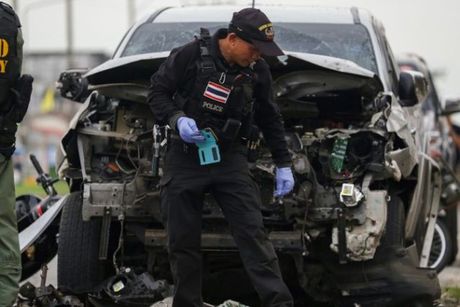 Two people, including a 14-year-old boy, were killed in a market place bombing in Thailand's Muslim-majority south, a military spokesman said Tuesday -- an apparent retaliatory attack for the killing of a wanted rebel leader.

Thailand's three southernmost provinces, Yala, Pattani and Narathiwat, have since 2004 been plagued with conflict between ethnic Malay-Muslim rebels and the Buddhist-majority Thai state, which annexed the region around a century ago.

Around 7,000 people, mostly civilians, have been killed in violence that rarely makes international headlines despite taking place a few hours south of some of Thailand's tourist hotspots.

Four military rangers were wounded in the blast.

The bombing appeared to be in "retaliation" for the death of a fugitive suspected rebel leader in neighbouring Yala province earlier in the day, who was shot dead as authorities surrounded his house, Thanawee told AFP.

The 37-year-old suspect, named as Abdulloh Lateh, was "head of operations" in the Yaha district.

The highly secretive rebels, who are pushing for autonomy from Thailand, operate in small village cells, with their senior leaders based overseas far from the reach of Thai authorities.

The grinding conflict is characterised by tit-for-tat attacks that usually target symbols of the Thai state and its security forces but civilians from both Muslim and Buddhist communities often get caught in the crossfire.

The region usually sees an uptick in violence during the Muslim holy month of Ramadan, which ends next week.

Monday's violence came a day after another bomb attack in Songkhla province killed a police officer at a checkpoint, wounding three others.

Video footage of Sunday's attack showed a plume of thick smoke as the blast went off, leaving a police officer's body lying in the middle of the road.

Thailand's junta leader Prayut Chan-O-Cha -- who is expected to return as a civilian prime minister in the coming days -- condemned the latest attacks as "inhuman".

Peace talks have been inconclusive despite an intensification of army operations in the border zone with Malaysia.