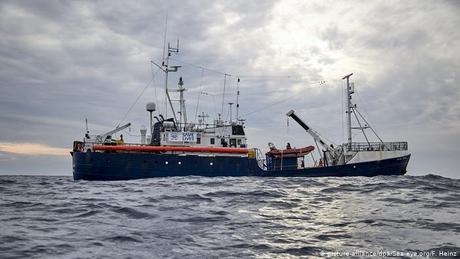 The Italian navy rescued 90 migrants stranded in the Mediterranean on Thursday, as 75 other migrants found clinging to a tuna pen were taken to Malta, officials said.

The Italian vessel rescued the migrants, including 15 children, after they sent an SOS signal to Alarm Phone, a volunteer-run Mediterranean rescue hotline, saying that they were taking on water.

The Italian navy confirmed to AFP that the rescue operation was under way but could not immediately provide any further details.

The migrants told Alarm Phone that a five-year-old girl on board had died, although this could not be independently confirmed.

Alarm Phone, which is operated by German association Watch the Med, said the Italian vessel could have rescued the stricken migrants "nearly a day ago".

The Maltese navy said earlier that it had rescued 75 migrants found clinging to a tuna pen while trying to make the dangerous journey across the Mediterranean.

The Maltese military said in a statement that it had coordinated multiple joint rescue operations in conjunction with the Italian coastguard and "in support of the Libyan coastguard".

The UN refugee agency said it spoke to the refugees and migrants when they arrived in Malta "exhausted, hungry, and extremely relieved to be on land after three days at sea."

Malta has appealed to the EU for help in dealing with the flow of migrants, which its much larger neighbour Italy has begun to turn away.

The island of 450,000 people is a common destination for migrants trying to cross the Mediterranean from North Africa, and a hardline stance from Italy has increased pressure on it.

In Italy, the UNHCR said that two boats carrying a total of 103 migrants arrived on the island of Lampedusa having left Libya three days ago.

The UNHCR said that they were "exhausted and cold".

International Organization for Migration figures show 24,687 migrants have reached Europe so far this year, well below the record of around one million in 2015, and 144,000 last year.