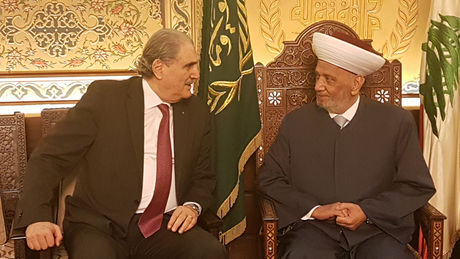 “President Aoun is keen on jurisdiction, especially that of the premiership,” Jreissati said after the meeting, noting that “the strong in their (confessional) communities are now at the head of the authorities.”

“We agreed with the mufti on interpreting 'the rule of the strong' as being based on the Document of National Accord and correct and credible popular representation,” he added.

Noting that he relayed Aoun's salutation to the mufti, Jreissati said Daryan expressed respect for the President.

“We agreed on the need not to attribute statements to anyone other than those who voice them and not to build up escalatory stances based on such statements,” the minister added.

“We were surprised and baffled by the extent reached by the latest political statements,” Jreissati went on to say.

State Minister for Presidency Affairs Salim Jreissati has earned my utmost respect and captured my wildest imagination for being surprised and baffled by the extent reached by the latest political statements.

Thank God we have a rational reasonable prime minister in Hariri.