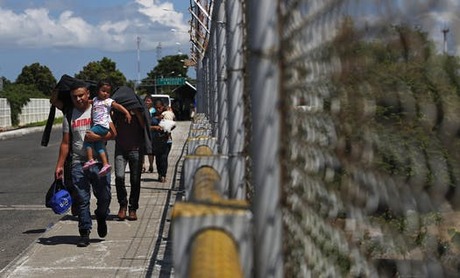 Mexico said Tuesday it has launched a committee to implement its deal with the United States on curbing undocumented migration in return for a reprieve from President Donald Trump's threatened tariffs.

President Andres Manuel Lopez Obrador named Foreign Minister Marcelo Ebrard -- his point man for the negotiations in Washington that produced Friday's deal -- as the top official on the committee.

It will also include the military commander for the southern border state of Chiapas and high-level labor, social welfare and prison officials.

"We have a fixed time period to prove that it is possible to reduce migration through development, through social welfare -- that the use of force is not the only option," Lopez Obrador told a press conference.

Under the deal, Mexico has agreed to bolster security on its southern border and expand its policy of taking back asylum-seekers as the United States processes their claims.

However, Mexico admitted Monday the deal was less a definitive solution than a temporary reprieve from Trump's tariffs -- which had been set to start at five percent this week and rise incrementally to 25 percent by October, raising fears of a damaging trade war with global repercussions.

Ebrard said if Washington is not satisfied with the results, Mexico City has agreed to discuss a key Trump demand: a "safe third country" agreement, in which migrants entering Mexican territory must apply for asylum there rather than the U.S.

Lopez Obrador, an anti-establishment leftist, has insisted tighter borders cannot be the only solution, insisting on the need to protect migrants' rights and fund major infrastructure and development projects in Central America.

But Mexico faces huge pressure to deliver immediate results at the US-Mexican border.

It has agreed to deploy 6,000 officers from its newly created National Guard to its own southern border in a bid to reduce the number of migrants entering the country.

Mexico's defense minister traveled Tuesday to the southern border. Officials were due to tour the region to decide where the National Guard should be deployed, Ebrard said.