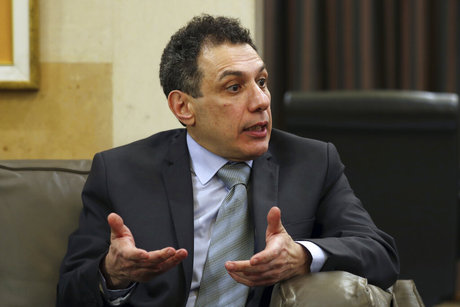 U.S. permanent resident and Lebanese businessman Nizar Zakka, who was imprisoned for four years in Iran before being released on Tuesday, has detailed his detention ordeal in several interviews with Lebanese TV networks.

“Even in movies, no one has witnessed the torture I was subjected to,” Zakka said in an interview with LBCI television, describing the Evin prison in Tehran as “the ugliest place in the world.”

“I was kidnapped, I was a hostage,” he added.

“I was not nabbed by the Iranian government, which had sent me an official invitation and a visa, but rather by the Iranian revolutionary guard, which is an independent apparatus in Iran,” he said.

Asked about the reason behind his arrest, Zakka said he believes that Iran had sought to tell the Americans that the 2015 nuclear agreement did not entail a drive towards “openness” in Iran, adding that he represented “freedom of expression and freedom of the internet” at the time.

Asked why he excluded Hizbullah from the parties he thanked for securing his release, Zakka declined to give a blunt answer but said that “every Lebanese should have supported an aggrieved person in prison from the very first day.”

He also revealed that he had declined a request from Iran to appear in a video while in detention.

“I remained for an additional year in prison because I refused to do a video and say what they wanted me to say,” he said.

“I’m a man who has never done anything wrong in his life. I have kids and a family and I went there on an official invitation,” Zakka added.

In another interview on MTV, Zakka said he will be “the voice of all the aggrieved.”

“The biggest role in my release was played by the Lebanese media, as well as by the letter that was sent by President (Michel) Aoun to the Iranian side,” Zakka added, while also giving credit to Prime Minister Saad Hariri and Foreign Minister Jebran Bassil.

“In the first stage, I was subjected to all forms of torture, and in the second stage, the torture was mental and psychological,” he added.

Speaking to al-Jadeed TV, Zakka said the Iranians “apologized” to him “from the very beginning” and that he was “an obstacle” for them.

“They were trying to find a way to release me,” he added.

Asked whether he might thank Hizbullah chief Sayyed Hassan Nasrallah, Zakka said: “Of course I thank everyone and anyone who supported the President for my release.”

“After I left prison, the Iranians bought me Iranian carpets and gifts for my children and for (General Security chief) Maj. Gen. (Abbas) Ibrahim,” he revealed.

“I thank the President (Michel Aoun) and I ask the American president to seek the release of all Americans in Iranian jails,” Zakka went on to say.

He also said that he has no knowledge of any swap deal involving him and Lebanese businessman Qassem Tajeddine, who is held in the United States on charges of aiding Hizbullah.

“I’m happy because I’m among my family,” he added.

There's more to this story than what we're being told Nevertheless,I'm glad he's out of the hellhole Now if the Syrian Resident of Baabda and his puppet can work on releasing Joe Sader from Hizbala's illegal and rogue detention center.

Respect! The man came out fighting and refusing to hide the facts about what happened and who helped him and who did not do so much...

Absolutely! He deserves every bit of respect.

Yes Nizar deserves all the respect. He is brave, honest, and determined.

Good this saga is over.

Notice, he said there are 2 separate entities. Iranian government, and revolutionary guard. Interesting..

yeah just like in Lebanon: the government and the state of hezbollah.

True that! They are duplicating their medieval state model with us.

They will get to westphalia level in 2 centuries!

This is Iran the model state that our quisling president wants to see lebanon follow in its footsteps. Were not too far off our military court is just as efficient in wrongfully accusing and holding others who may not agree with their peaceful plans....