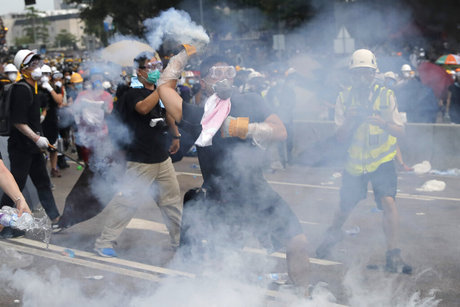 Hong Kong was rocked Wednesday by the worst political unrest since its handover to China, as police fired tear gas and rubber bullets to disperse protesters who tried to storm parliament and blocked roads in the financial hub.

The violent demonstrations were the latest expression of widespread public anger over the government's controversial Beijing-backed plan to allow extraditions to China.

Clashes broke out hours after tens of thousands of people seized key arteries in the morning rush hour and surrounded the city's parliament, forcing lawmakers to postpone a debate on the proposed law.

Hong Kong Chief Executive Carrie Lam, who is championing the law's passage, described the protests as "organised riots" and called for calm to be restored.

"The rioting actions that damage peaceful society, ignoring law and discipline is unacceptable for any civilised societies," she said in a video statement.

International concern grew with the European Union saying that Hong Kong rights "need to be respected," while U.S. President Donald Trump said he hoped the protesters can "work it out" with Beijing.

The scenes echoed the pro-democracy "Umbrella Movement" of 2014 where protesters calling for greater democratic rights shut down swathes of the city for two months and battled police, but won no concessions from Beijing.

This time police appeared determined not to let protesters hold any ground while the young demonstrators responded in kind, hurling projectiles including metal poles, bottles and bricks.

Tear gas sent the crowds scattering, but riot police continued to fight cat and mouse battles with their opponents into the evening, pushing them down towards the city's commercial centre and bringing it to a standstill.

Wounded police and protesters were seen being carried away and Hong Kong's stock market was also hurt, closing down 1.7 percent Wednesday.

Hong Kong has been convulsed by political unrest in recent years as fears surge that Beijing is trying to stamp on the city's unique freedoms and culture.

But Wednesday's violence was an unprecedented escalation of the conflict.

"In terms of the level of violence, today has been the most serious since the 1997 handover," political analyst Dixon Sing told AFP, citing the sustained use of tear gas, rubber bullets and bean bag rounds, as well as the willingness of protesters to take on the police.

"Today's events reflect a huge gap in the confidence Hong Kong people have towards the government. They increasingly believe the Hong Kong government are a bunch of puppets serving the interests of Beijing," he added.

The proposed law would allow Hong Kong to send suspects to other jurisdictions around the world -- including China.

Hong Kong's leaders say it is needed to plug loopholes and to stop the city being a sanctuary for fugitives. They say safeguards are in place to ensure that political critics of Beijing will not be targeted.

But it is deeply unpopular, with fears people will become entangled in the mainland's opaque courts, leaving them vulnerable to a justice system seen as acting at the behest of the Chinese Communist Party.

Opposition to the bill has united an unusually wide cross-section of the city, from influential businessmen and lawyers, to religious groups, student unions and workers.

On Sunday record crowds of around one million marched against the law but failed to move pro-Beijing Lam.

"These violent protesters kept charging at our line of defence, and used very dangerous weapons, including... throwing metal barricades at us and throwing bricks," he said.

But Amnesty International said police "took advantage of the violent acts of a small minority as a pretext to use excessive force against the vast majority of peaceful protesters."

Authorities are determined to have the law on the books as soon as possible but protesters have vowed to keep hitting the streets until the bill is shelved.

"The only responsible thing to do now is for Carrie Lam to withdraw the evil bill, or at least to shelve it in order to solve the crisis," said pro-democracy lawmaker Fernando Cheung.

"I will keep fighting," protester Kevin Leung, 20, told AFP late Wednesday. "Until our goal is achieved, we will keep going."

Speaking to reporters in Washington, Trump said, "I understand the reason for the demonstration," and expressed hope "it all works out for China and for Hong Kong."

The EU's external affairs arm said Hong Kong's people have been exercising "their fundamental right to assemble and express themselves freely and peacefully. These rights need to be respected."

Under the handover agreement with Britain, China allowed Hong Kong to retain the freedoms and an independent judiciary that were integral to its economic success for 50 years.

But there are fears China is reneging on that deal, a slide that critics say has worsened since President Xi Jinping ushered in an era of more authoritarian rule on the mainland.