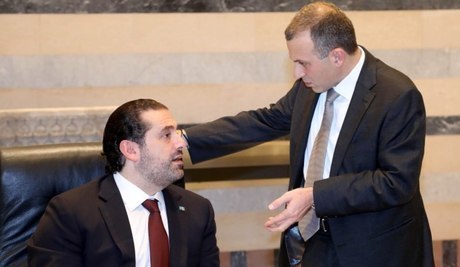 The Free Patriotic Movement affirmed that the political settlement with Prime Minister Saad Hariri “did not fall,” as they praised the latest meeting between FPM State Minister for Presidency Affairs Salim Jreissati with Grand Mufti of the Republic Sheikh Abdul Latif Daryan, the Saudi Asharq al-Awsat newspaper reported on Wednesday.

Senior FPM sources told the daily “the settlement has been shaken a little bit but it has not fallen. The settlement is based on strategic, uncontroversial issues, and Jreissati has reflected the position of President Aoun during his meeting with Daryan,” they stressed.

The sources denied claims that ties between Hariri and the FPM have reached a point of “no return.”

On Monday, Jreissati met with Daryan after which he announced that Aoun is keen on Hariri's constitutional powers.

“President Aoun is keen on jurisdiction, especially that of the premiership,” Jreissati said.

Lately, the political settlement between Aoun and Hariri, that brought Aoun to the post of presidency, was said to be in jeopardy after a wave of tirades between Hariri’s al-Mustaqbal Movement and the FPM (founded by Aoun and run by his son-in-law Foreign Minister Jebran Bassil).

Bassil has launched a series of “unpopular” positions that drew the ire of Hariri’s al-Mustaqbal public. He accused Sunni politicians of assuming key government positions and “dominating the Chritians’ rights.”

Shaken but not stirred.... as James Bonds says.

They deserve each other

Nothing will happen, remember that Jebran Bassil and Ned Hariri got billions of dollars in kickbacks for the oil exploration file. If one goes down, so will the other.